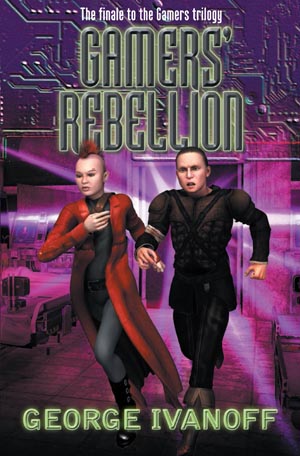 At the end of March, just before I was due to head off on holiday, something wonderful arrived in the mail. It was a book! Now, I’m always excited when a book shows up in my post box, but this one was special. Not only was it a book that I had written, but it was the third book in my Gamers series. That’s right folks… I had achieved trilogy status. [insert thunderous applause] Gamers’ Rebellion had physical form. [insert more applause + some enthusiastic cheering]

I desperately wanted to blog about it and take photos of it and stroke it and… well, you get the picture. But I had a deadline for two other books that had to be emailed off to the respective editors before I could catch my plane. So Gamers’ Rebellion sat on the edge of my desk, where I could glance at it every once in a while, as I desperately struggled with my deadline.

Then, with the deadline met, my family and I were off to Mackay in sunny Queensland. Of course, I took the book with me. I was intending to get a photo of me and the book out on a beach somewhere, ready to slap up onto my blog upon my return.

But we were staying with friends in Mackay — a family that included ten-year-old Jacob. And Jacob was half way through reading Gamers’ Quest when we arrived. He was rather excited to discover that he had two further books to look forward to, rather than one. So it seemed like a good idea for my book and I to share the limelight with Jacob in our planned photo.

And thus, may I present to you, THE PHOTO… 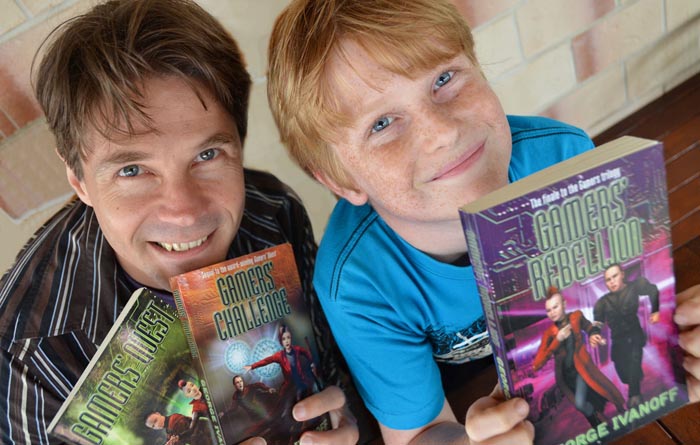 Jacob became the first kid in the country to hold a copy of Gamers’ Rebellion. He was a just a little bit excited.

Unfortunately I had to snatch the book away and bring it home with me. It is an advance copy, and the only one I have for the time being. The bulk shipment of books is on a boat somewhere between here and China, where it was printed. [insert silent prayer that the boat doesn’t sink, or get raided by pirates, or find itself attacked by a humungous sea monster, or…]

Anyway… assuming the boat makes it to our golden shores, Gamers’ Rebellion will hit the bookstores in June, when Jacob (and hopefully, LOTS of other people) will be able to pick up their copies. I will, no doubt, be shouting about it from the rooftops when the time comes. 🙂