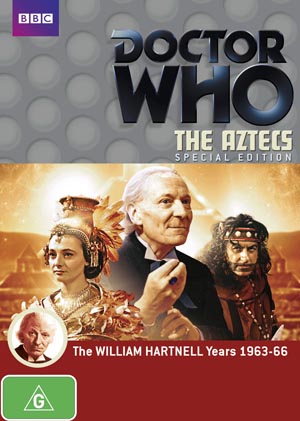 And so the BBC continues their trend of re-issuing previously released Doctor Who DVDs as special editions. This time around they’ve given us “The Aztecs”, with a reconstructed “Galaxy 4” as an added bonus. “The Aztecs” is vintage historical Who at its best. I love it!

“The Aztecs” is a four-part story from the first season of Doctor Who, and was first broadcast in 1964. Back then, the series had an educational focus, so purely historical stories such as this were interspersed among the science fiction based stories.

The TARDIS materialises inside an Aztec tomb, bringing The Doctor, Ian, Barbara and Susan to Mexico in the 15th Century. Barbara is the first to emerge from the tomb and is mistaken for the reincarnation of the high priest Yetaxa, with the others assumed to be her servants. But as they emerge, the tomb door closes, leaving them cut off from the TARDIS. So they must persist with their masquerade until they can find a way back into the tomb. Politics, romance, cocoa and attempts to change history follow!

If you can overlook the creases in the painted backdrops and the painfully bad fight choreography, “The Aztecs” makes for engaging viewing. The story is riveting and well scripted, with good dialogue and great character drama. It is also interesting for a number of reasons. For starters, there’s the Doctor’s first onscreen romance… even though it is a little one-sided. Although the Doctor enters into things unknowingly, there is still a sense of affection present… yet his treatment of Cameca is rather self-centred. He uses her affections to gain information and assistance, and then refuses to take her with him when he leaves. He’s a hard-hearted old codger, the first Doctor.

“I made some cocoa and got engaged…”

Then there is the Doctor’s insistence that history should not be tampered with. His feelings on the matter really come to the surface when he berates Barbara for her altruistic attempts to end the Aztecs’ sacrifices. He really is quite emphatic with his words, perhaps even a little harsh. This scene highlights that this story, regardless of the other sub-plots, belongs to Barbara and the Doctor. Hartnell and Jacqueline Hill are in top form.

“But you can’t rewrite history! Not one line!”

The guest cast are superb, particularly Keith Pyott as the High Priest of Knowledge and John Ringham as the High Priest of Sacrifice. Their power struggle is a joy to watch and the contrast in the performances is perfectly balanced — Ringham with his wide-eyed, manic portrayal and Pyott with a more restrained, slightly bemused performance. Margot van der Burgh is also excellent as Cameca.

Costumes and set design are all good. And despite the occasional crease, the painted backdrops are very effective. On the negative side, there is the warrior sub-plot with Ian. A schoolteacher’s defeat of a highly trained Aztec warrior does stretch credibility somewhat. But all up, this is a solid historical story and a great example of early Doctor Who.

Being a special edition, there are lots of extra features, including docos about the making of the story, a poorly put together piece about the restoration, some historical docos and various other general bits and pieces. The commentary, with William Russell (Ian), Carole Ann Ford (Susan) and Verity Lambert (producer) is interesting but suffers from the lack of a moderator.

The most interesting of the extras is the inclusion of “Galaxy 4”. This is a four-part story and the season opener for Season 3 in 1965. Only one episode survives intact, along with a little bit of additional footage and the soundtrack. What is presented here is an edited reconstruction combining the soundtrack with photos and some limited computer graphics, along with the surviving footage. It makes for interesting viewing even though it is not a great story by any means.

Doctor Who: The Aztecs, Special Edition is released in Australian on DVD by Roadshow Entertainment.

PS. Viewing Clutter has been shortlisted for a Chronos Award. If you’re a member of Continuum 9, perhaps you might consider voting for it.