DVD Review — Doctor Who: The Ark in Space, Special Edition 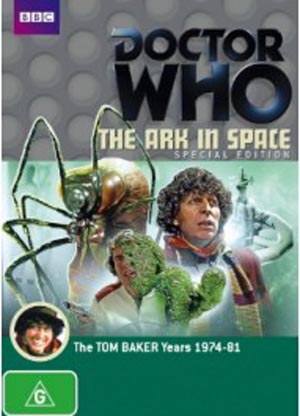 And the award for the most creative over-use of green bubble wrap goes to… “The Ark in Space” — Tom Baker’s second story as the fourth Doctor. First broadcast in 1975 as part of Season 12, it still makes for entertaining viewing today (despite the aforementioned bubble wrap).

The Doctor, along with Sarah Jane and Harry Sullivan, arrives on space station Nerva (also referred to as the Ark), which contains the remains of the human race in suspended animation, waiting for the Earth to be habitable once more after being ravaged by solar flares. But it seems they have over-slept. And they have space-bugs. The giant wasp-like Wirrn have laid their eggs and intend to use the sleeping humans as food. Can the Doctor save the human race?

“The Ark in Space” is, of course, the first of the ‘Ark’ sequence of four stories, and the final scene sets things up for the next story, “The Sontaran Experiment”.

It’s an excellent story (despite a couple of small hiccups) — simple, but with a good SF concept; exciting, with some nice moments of tension; and well paced. As you would expect from scriptwriter Robert Holmes, the dialogue (particularly the Doctor’s) is sparkling.

“…my doctorate is purely honorary, and Harry here is only qualified to work on sailors.”

“Homo sapiens. What an inventive, invincible species. It’s only a few million years since they crawled up out of the mud and learned to walk. Puny, defenceless bipeds. They’ve survived flood, famine and plague. They’ve survived cosmic wars and holocausts. And now, here they are, out among the stars, waiting to begin a new life. Ready to outsit eternity. They’re indomitable.”

The production is a bit mixed. The sets are brilliant! The costumes are great! The model work is quite nice. The Wirrn are a good design, but the execution is not wonderful… and they are so brightly lit you can see how immobile they are. And then there’s the bubble wrap, masquerading as alien membrane. It’s rather amusing, watching the Nerva commander being slowly taken over by… [insert ominous music]… bubble wrap! One can only assume that the substance was not as ubiquitously recognisable back in 1975.

The regular cast are in top form. The marvellous scene where the Doctor goads Sarah Jane into getting through a difficult situation is a superb example. The guest cast is a mixed bag. In the corner for excellence we have Wendy Williams as the med-tech Vira. In the scene-chewing OTT corner we have Kenton Moore as Commander Noah. Although he does get brownie points for managing any sort of performance while encased in bubble wrap. Oh, and keep an eye out for the extra in the background of several scenes in ep 1 — he keeps moving around even thought he’s supposed to be in suspended animation.

Being a “special edition”, there are loads of extra features on the two discs. The commentary (from the original release) has Tom Baker, Elisabeth Sladen and producer Philip Hinchcliffe, spending a little too much time silently watching the story rather than commentating. It’s a pity, as when they do talk they are very interesting. There are some excellent docos, particularly the one about Doctor Who books. And there are some hidden Easter Eggs, so make sure to watch all the way to the end of the credits in ep 4, as well a searching for two others. But then there’s the ‘why bother” stuff — the option to watch the story with CGI effects and the edited (butchered) movie version of the story.

All up, this is a great story and a great release.

Doctor Who: The Ark in Space, Special Edition is released in Australia on DVD by Roadshow Entertainment.