DVD Review — Doctor Who: The Enemy of the World 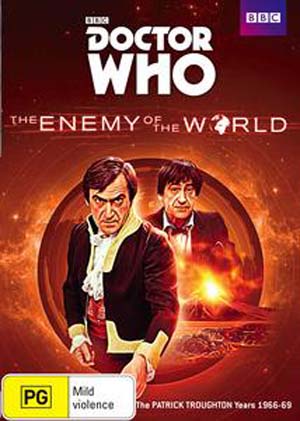 “The Enemy of the World” is a six-part story from Season 5 of Doctor Who in 1967/68, featuring Patrick Troughton as the second Doctor. Lost for many years because of the BBC’s great archival purge, it was re-discovered earlier this year, cleaned up and rushed out to a DVD release. But is it a lost classic or an over-hyped absentee?

The Doctor, Jamie and Victoria land in Australia (hooray!) in the near future (well, the near future for 1967). It is a world on the brink of political change, with a man named Salamander seeking to take charge. But is he a tough benefactor or a would-be dictator? That’s what the Doctor needs to find out before agreeing to help a group of rebels. The interesting thing is that Salamander is the Doctor’s doppelganger. In order to get the information he needs, the Doctor soon finds himself impersonating Salamander and sending his companions off on an under cover mission.

This story has come under some criticism for being low-budget and a pointless James Bond rip-off. Salamander also seems to get some shtick for his accent and bull-fighter-ish outfit. And it is sometimes referred to as the weakest story of its season. I disagree. I loved this story from start to finish, and it was certainly better than the previous story, “The Ice Warriors” (see my review). It does not come across as any more low-budget than other Troughton stories — in fact, the helicopter and hovercraft make it look slightly higher budget.

“The Enemy of the World” is very different from most stories of this era, where the ‘base-under-siege’ formula was de rigueur. Mixing political intrigue with science fiction plot points, including manipulation of natural disasters and a secret underground base, this story serves up something quite daring and unique. It’s a great story with a nice build-up of tension and a couple of brilliant plot twists. And the final scene is quite chilling. It makes for compelling drama. Lots of excellent dialogue as well, particularly for Troughton.

“People spend all their time making nice things, and then other people come along and break them.”

There is an interesting mix of guest cast, most of them doing a good to excellent job. Colin Douglas gives a standout performance as the security chief Donald Bruce, often underplaying. And Mary Peach is great as Astrid. It’s worth noting the appearance of Milton Johns as the sadistic Benik. Watch his eyes, full of excitement, as he talks about torturing Jamie and Victoria. He would go on to play Guy Crayford in “The Android Invasion” and Castellan Kelner in “The Invasion of Time”.

But this story, of course, belongs to Patrick Troughton as he plays two roles with obvious relish. He is at his erratic and playful best as the Doctor, while giving us a thoroughly convincing and menacing villain as Salamander — full of purpose and determination and a mad scheme to rule the world.

This single disc release is very disappointing, as it contains no extras. It has obviously been rushed out after the story’s discovery and restoration. Given that the story had already been released on iTunes, I would have preferred a longer wait for a DVD with some extra material. But, I suppose we’ll get a special edition with all of that in the not to distant future. The cover design is slightly different from, and not as good as, the standard Doctor Who classic releases — again, adding to the impression of a rushed release.

While this story may not be representative of what Doctor Who was at the time, “The Enemy of the World” is a wonderful example of compelling drama. Highly recommended for both fans and casual viewers!

Doctor Who: The Enemy of the World is released in Australia by Roadshow Entertainment.

5(ish) Highlights of #SaveTheDay In the news