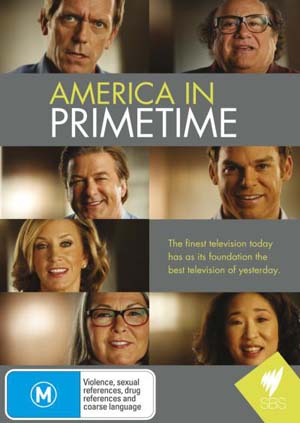 America in Primetime is a fascinating four-part documentary about American Primetime drama/comedy (no mention of reality TV — Hooray!), that reveals how the American television industry sees itself. Part history, part tribute, it is an interesting mix of insight, analysis and congratulatory retrospective.

America in Primetime tackles things with a thematic approach. Each of the four episodes explores a different theme through a particular type of character: “Man of the House”; “The Crusader”; “The Independent Woman”; and “The Misfit”. Each type is explored in terms of its development (and sometimes rejection/subversion) over the years through various different programs. Thus we get, not only a history of America’s television, but a little bit about the way its society has developed — the whole idea of television either mirroring society or trying to give it what it doesn’t have.

It’s an interesting approach that works rather well. And although the approach means we don’t get a comprehensive history, it does mean we get an entertaining and insightful one. The series is also really interesting for the choices that it makes — not just the shows it chooses to include, but those that it excludes. So, for instance, Buffy The Vampire Slayer only gets a passing mention, whereas I thought it was a vital step in the development of “The Independent Woman”. Babylon 5 is conspicuously absent. And yet, the British series The Avengers gets a mention. Interesting choices! I can’t help but wonder how much these choices were influenced by the bias of the documentary makers, and how much by the willingness of the respective series makers to cooperate?

All up, this is an interesting doco that is well worth a watch.

America in Primetime is released on DVD in Australia by Madman.

Writing about Doctor Who DVD Review — Tekwar: The Complete Series