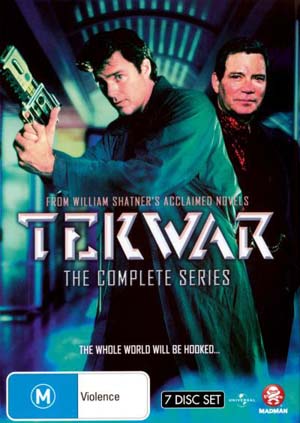 Based on William Shatner’s novels and made in the mid-1990s, Tekwar is a series of four tele-movies followed by an 18-episode season of a weekly series. Like many other sci-fi shows from this era, it has a reasonable premise but a patchy delivery. It is, nonetheless, an entertaining show.

I’ve never read the novels (apparently ghost written by Ron Goulart), so I can’t comment on how accurate an adaptation it is. All I know is that the novels were set 200 years in the future, while the tele-movies and series are set in 2045.

The premise is a solid crime meets sci-fi situation. An ex-cop named Jake Cardigan is framed for a crime — dealing in Tek, which is an addictive narcotic-like VR technology. Released early from his 15-year sentence of cryo-detainment, he goes to work for a private security firm owned by the mysterious Walter Bascom. While he investigates Tek related crimes, he also strives to prove his innocence.

The first tele-movie suffers from set-up syndrome and poorly executed action sequences. The second and fourth are a lot better, while #3 is rather abysmal despite the presence of Michael York. Then the series settles into a not-always formulaic pattern of crime solving. On the down side, there are some clichéd storylines, poor acting from guest cast and obviously rushed shooting (I lost count of the number of times I saw the boom microphone drop into view). On the plus side, there are some well-written eps with surprises and twists and good drama. While it’s all rather episodic, there is some sense of development for Cardigan. It’s also interesting that the series goes through several changes in supporting cast — (SPOILER ALERT) Yes, people die! A definite plus as far as I’m concerned, as it adds dramatic tension if you’re not certain about the good guys always surviving.

The regular cast are all adequate. The only two who really stand out are Natalie Radford as Nika, who provides technical support for Cardigan; and William Shatner as Walter Bascom.

Tekwar is released as a 7-disc set, presented in a standard plastic DVD case within a cardboard slipcase, with a rather uninspired cover design. No extras! 🙁

Tekwar is no match for the current crop of television science fiction, but as an example of 1990s episodic television you could do a lot worse. I certainly enjoyed it.

Tekwar: The Complete Series is released on DVD in Australia by Madman.