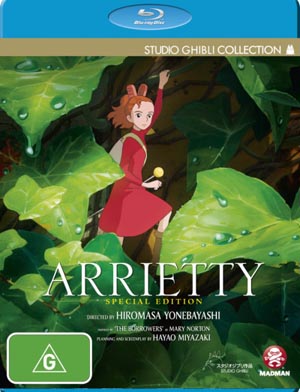 Arrietty, the latest animated film from Japan’s Studio Ghibli, was released on Blu-ray earlier this year. It is a lovely film (see my review). Now it’s been re-released in a special edition.

The main difference between the two editions is the inclusion of the U.S. version of the film. The first edition has the original Japanese language version with subtitles and the U.K. dub. This new edition also includes the U.S. dub. It makes for a really interesting comparison.

The difference between the subtitled version and the U.K. dub is minimal, with most dialogue changes there to facilitate lip sync. The U.S. version makes further changes. Character names are anglicised, subtleties are removed and things made more obvious (it’s as if they are assuming the audience is is not clever enough to work things out for themselves). There are a couple of instances where negative elements of the main characters are softened (eg. in the U.S. version Arrietty does not directly lie to her father). But the biggest change is the ending. The U.S. version adds a voice over which ensures a definite happy ending in place of the uncertainty of the original. I can live with most of the changes, but this last one is dreadful.

The U.S. cast all do a good job with the voices. I can’t say that they are any better or worse that the U.K. cast. I guess it all depends on your preference of accent.

If you already own the standard edition, I wouldn’t bother with this one, as the U.K. dub is far superior. But if you don’t already own the film, then its worth getting the special edition. Comparing the different versions makes for a fascinating study in cultural differences.

The special edition of Arrietty is available on Blu-ray in Australia through Madman.

DVD Review — Doctor Who: The Claws of Axos, Special Edition The Next Big Thing