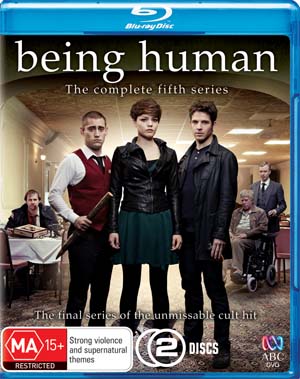 Being Human is a series that mixes horror, humour and human drama (in varying amounts) in a story about a vampire, a ghost and a werewolf cohabitating and trying desperately (and usually unsuccessfully) to live ‘normal’ lives. This is the final season, and the only one to have none of the original cast.

Season four (see review) finished with a very dramatic ending, featuring the departure of Annie the ghost, the last of the original trio of characters. Her replacement, Alex, fills her shoes very well — in fact, I like her better.

This final season goes all out, in giving our new trio the biggest and baddest of adversaries — the Devil, himself. There is a good mix of humour and drama in this season, with some really wonderful character development. The rapport between Hal the vampire and Tom the werewolf is particularly good. And everything comes full circle with a focus on our trio valiantly attempting to be human. The ending is PERFECT! It’s open to interpretation, I guess, but in my mind it’s quite clear what’s happened. While I’m sorry to see this series end, it did feel right.

The ensemble of guest cast are nothing short of brilliant. Philip Davis takes centre stage as the devil, but others also get their chance to shine —from Amanda Hale’s dichotomous performance as Lady Mary to Ricky Grover’s surprisingly touching portrayal of a dim werewolf yearning for the past; from Steven Robertson’s morally ambiguous head of a defunct government organization to Colin Hoult’s complex doofus turned werewolf.

As with the previous season, there are NO EXTRAS! Very disappointing… especially given this is the final season. 🙁

Being Human: The Complete Fifth Series is released on Blu-ray and DVD in Australian by Roadshow Entertainment.