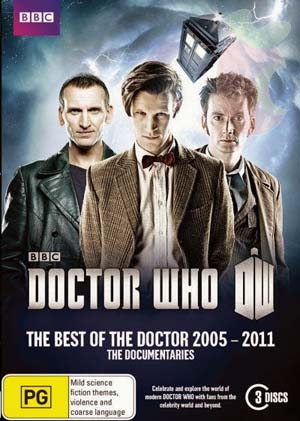 The Best of the Doctor? I think not! The best of nuWho? Perhaps. Pity that the docos themselves are mostly pointless waffle.

Doctor Who: The Best of the Doctor 2005-2011, The Documentaries is a three-disc set that collects together a series of docos made by BBC America, about various aspects (the best aspects?) of the new series. Some of them have been previously released with Doctor Who Series 7, but now you can get to whole set. They are:

These docos are aimed squarely at US fans of the new series, mostly ignoring the show’s history. They are predominantly made up of irrelevant US celebrities waffling on about various aspects of the show (often merely summarising the events of particular episodes) interspersed with clips and slightly more interesting waffle from some relevant people. They offer nothing new.

There are two interesting things about watching these docos. Firstly, we get a little insight into how the show is marketed to the general US public (lowest common denominator?), isolated from its history. Secondly, we get to see the radically different style (style without substance?) of a US produced doco as compared with the UK docos available on other Doctor Who releases (“The Doctors Revisited”, for example).

This set of discs is probably good for someone interested in the new series, who hasn’t seen all the eps and wants a bit of a catch up. For the dedicated Doctor Who fan it’s all pretty pointless… Unless, of course, you’re a completist who must own everything. 🙂

Doctor Who: The Best of the Doctor 2005-2011, The Documentaries is released on DVD in Australia by Roadshow Entertainment.