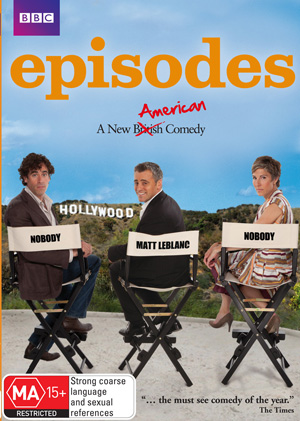 Episodes is an unusual comedy series. Created and written by two American writers but produced and shot in the UK by the BBC, it revolves around Hollywood’s tendency to remake British TV shows for the US market by changing everything about the originals that made them successful. Episodes is a witty, odd and often scathing series that’s well worth watching.

Beverly and Sean Lincoln are a married couple… and the writers of Lyman’s Boys, a BAFTA-winning British comedy series about the erudite headmaster of an elite school for boys. US TV exec Merc Lapidus entices them over to LA to write and produce a pilot for a US version of the series. Things do not go smoothly. Aside from the fact that Merc has never even bothered to watch the original series, he insists on casting Matt LeBlanc in the lead — a decision which leads to a string of changes resulting in a series about a school hockey coach, called Pucks.

Why oh why do American television producers continue to destroy brilliant British tv shows with horrible, horrible remakes? I’ve often pondered this question. And Episodes provides the answers in a fun and entertaining format.

I have to admit, it took me a couple of episodes to warm to Episodes. But it wasn’t long before I was engaged in the lives and struggles of these characters.

The cast is superb — from John Pankow’s oily studio exec to Tamsin Greig and Stephen Mangan’s hapless writing couple. But it is Matt MeBlanc who is the most fascinating, as he plays a fictionalised version of himself. With the line between reality and make-believe suitably blurred, his character emerges as a believable caricature who, despite his questionable actions, is oddly sympathetic and likeable.

There are 7 episodes in this first season of Episodes. I’m already looking forward to season two.

The DVD release is good, with a great behind-the-scene doco.

Episodes is release on DVD in Australia by Roadshow Entertainment.