DVD Review — Doctor Who: The Seeds of Doom 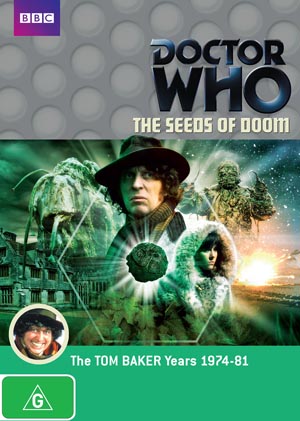 A botanically obsessed millionaire, a carnivorous alien plant and a charismatic thug come together to cause trouble for the fourth Doctor (Tom Baker) and Sarah Jane Smith (Elisabeth Sladen) in “The Seeds of Doom”. The end result is a stylish, engaging and exciting action/adventure story from the 13th season of Doctor Who in 1976.

Scientists at an Arctic base discover a strange pod buried in the permafrost. The Doctor, as U.N.I.T.’s scientific advisor, is sent to investigate. The pod turns out to be a carnivorous alien plant called a Krynoid. The pod germinates and infects one of the scientists, who begins to mutate into a murderous plant creature. Meanwhile, millionaire Harrison Chase, who has an obsession with plants, sends henchmen to the Arctic to retrieve the pod. The first Krynoid is defeated, but the henchmen escape with a second pod. Soon the whole thing begins again in England.

Structurally, this is an interesting story. There are six episodes, but the story is divided, with the first two parts primarily set at the Arctic base and the remaining four, back in England. Six-part stories in Doctor Who have often felt padded, but this division keeps “The Seeds of Doom” moving well. It’s almost like having two linked stories.

Writer Robert Banks Stewart has really delivered a solid script. It’s hard to go wrong with such a great story premise — alien plants that send out pods to other planets in order to take them over. The Doctor himself explains…

What really makes this story so captivating are the characters and the witty dialogue. There are three standouts for me.

The unstable millionaire Harrison Chase is played to perfection by Tony Beckley. It’s a remarkably restrained performance, given some of the over-the-top lines.

“The plants must win. It will be a new world. Silent and beautiful.”

Not quite so restrained is John Challis as Chase’s thug-for-hire, Scorby. But it is a charismatic performance, well-suited to the role and to the story.

Finally, we have Sylvia Coleridge as the delightfully dotty, chain-smoking, botanical artist Amelia Ducat. Coleridge’s performance is just the right mix of enthusiasm, intrigue and absent-mindedness. She’s a joy to watch and steals every scene she’s in.

Both Tom Baker and Elisabeth Sladen are in fine form. Some people have suggested that the Doctor is a little out of character in “The Seeds of Doom”, engaging in fisticuffs and brandishing a gun. But this is neither the first nor last time the Doctor has carried weapons and, in his defence, he never actually fires the gun. His dialogue is particularly good in this story, as when he says the following to bureaucrat Sir Colin Thackeray…

“If we don’t find that pod before it germinates, it’ll be the end of everything. Everything, you understand? Even your pension!”

Yes, there are a couple of hick-ups in the logic, and production values do occasionally provide an unintentional giggle (the sound of shoes walking on polystyrene snow), but this is such an entertaining story, these small flaws are easy to forgive. And for the most part, the effects are better than average for 1970s-vintage Who — particularly the model work and explosions. Douglas Camfield, who directed several standout Doctor Who stories, oversees this one with flair and a good sense of how to shoot a low-budget monster and make it effective.

This is an excellent two-disc DVD release with loads of extra features. There’s a ‘making of’ doco as well as featurettes about music, comics and production assistant Graeme Harper (who went on to direct episodes of both the classic series and the revival). There is an entertaining commentary with Tom Baker, John Challis, Kenneth Gilbert (Richard Dunbar), Michael McStay (Derek Moberley), Philip Hinchcliffe (producer), Robert Banks Stewart (writer), Roger Murray-Leach (designer) and, oddly, the late director’s son. There are also a couple of great hidden extras (easter eggs) — a short but very amusing outtake and an entertaining little anecdote from John Challis, including his Jimmy Stewart impression.

This is a brilliant release for the fans, but also one that can be enjoyed by casual viewers. Highly recommended!

Doctor Who: The Seeds of Doom is released on DVD in Australia by Roadshow.