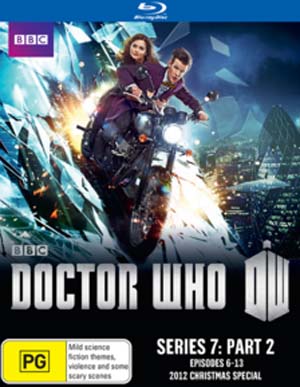 Series 7.2 of the revived Doctor Who series is, like 7.1, a hodgepodge of really cool ideas in search of a narrative structure. Sometimes the ideas are enough to sustain the episode (The Bells of Saint John) and sometimes they are not (The Rings of Akhaten). The result is an entertaining half season that is a little lacking in substance.

The Blu-ray set kicks off with the Christmas special, “The Snowmen” — an entertaining story that provides an origin for the Great Intelligence (GI), which appeared in two classic Second Doctor stories. Things fall apart towards the end in a supposedly emotion-charged climax that is actually rather lacking in any real emotion.

“The Bells of Saint John” is a wonderfully entertaining story if you don’t think too much about the details. The Spoonheads, for example, are a visually striking creation… But they’re not very well disguised if you happen to walk up behind one. Arc-wise, this story works well as a follow on from the Christmas Special and keeps the GI in the loop until the season finale.

“The Rings of Akahtan” has a great idea at its core, but flounders in the execution. It is poorly paced, not terribly well directed and features a rather over-played monster.

“Cold War” is a wonderfully tense and claustrophobic tale. It sees the return of the Ice Warriors from the classic series, adding to their culture and mythos in a very satisfactory way. It also has a particularly good set of supporting characters, with David Warner’s eccentric Professor Grisenko being my favourite.

“Hide” is a suitably atmospheric ghost story, that isn’t really a ghost story. The build-up is great but it loses it a little at the end, and some of the details are sketchy and don’t really bear thinking about too much.

“Journey to the Centre of the TARDIS” is interesting, but also rather confusing at times. The ending is particularly muddled in a wibbly wobbly timey wimey kinda way.

“The Crimson Horror” is a cracker of an episode. It’s a well-told story with a simple idea at its core. The guest cast is great, the direction is tight and it features the Paternoster Street gang (always a welcome addition to an episode).

“Nightmare in Silver” is perhaps the greatest disappointment of the set. It’s not terrible… but it’s not great, either. As a Neil Gaiman fan, I expected better from him, especially given his first Doctor Who script was the utterly brilliant “The Doctor’s Wife”. This story, however, is cliché piled upon cliché, with annoying children, a bafflingly emotional Cyberplanner, Cybermen that bear more resemblance to Star Trek’s Borg than the Cybermen of old… and a fizzer of an ending.

The season concludes with the game-changing, audacious retconning spectacle of “The Name of the Doctor”. This is such a Moffat episode, creating expectations, then subverting them. Despite the fact that it is guilty of nonsensical and unexplained plot points (who are the Whispermen; when did the GI develop an ability to time travel; why didn’t silence fall?) and emotional cheats (how many times will this writer kill off a character only to bring him/her back), it still manages to enthral. In fact, I didn’t even notice the flaws until many hours after having watched the episode. I went back for a second viewing, and even then the flaws melted away during the watching experience.

On the whole, I enjoyed this half season, although I’d really like to see less emphasis on cramming in cool ideas and emotional twists, and more care taken with simply telling good stories.

The episodes look and sound great on Blu-ray. It’s a three-disc set packaged in a standard Blu-ray case within a nice cardboard slipcase. But the release is, like 7.1, a little disappointing. It includes the prequels and the Children In Need special, but no commentaries. And the only doco is a rather lame US made retrospective about the new series companions, which very annoyingly omits any reference to Donna (my favourite of the nuWho companions). Given the often lavish DVD treatment bestowed upon the classic Who releases, this trend of minimal extras on the new series releases is extremely disappointing. Maybe they’ll produce a complete Series 7 box set later down the track with additional material. One can hope.

Doctor Who: Series 7, Part 2 is released in Australia on DVD and Blu-ray by Roadshow Entertainment.