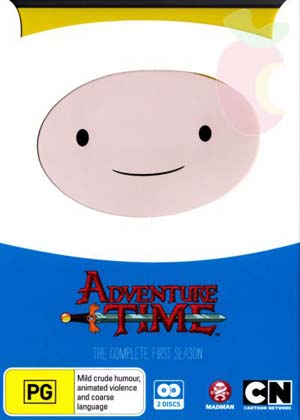 Adventure Time would have to be one of the weirdest shows I’ve ever watched. I’m not even sure I can adequately explain it. But weird though it is, the first season of this series is also very entertaining in a WTF kind of way.

Adventure Time is an animated comedy which, I presume, is aimed at teenagers. But don’t hold me to this… I could be wrong. It’s about the adventures of a boy named Finn and his magical talking dog Jake, in the post-apocalyptic Land of Ooo. The whole thing seems completely random at first, but as you progress through the first season you realise that there is a bizarre sort of internal logic to it all.

The only way I can get across the oddness of this show, is to attempt to describe one episode — “Ricardio the Heart Guy”. [takes deep breathe] Here goes…

The evil Ice King gives independent life to his heart, who takes on the persona of Ricardio (voiced perfectly by George Takei). Ricardio puts into action a plan to capture Princess Bubblegum so that he can cut her open in order to make out with her heart. So it’s up to our heroes, Finn and Jake, to put a stop to Ricardio’s plans.

Other episodes, involving zombies, a vampire queen and even a Never-Ending Pie-Throwing Robot, are just as way-out. One cannot help but wonder what substances the creators of this show are using.

If you’re into odd, random stuff, then definitely give this show a go. There have been five seasons so far, and I believe a sixth is on the way, so if you like season one there are lots more eps to look forward to. And there are lots of extra on the discs to keep you further entertained.

Adventure Time: The Complete First Season is released on DVD in Australia by Madman.