THEY CAME FROM OUTTA THIS WORLD… MAYBE is the first (and longest) section in The Supernatural Survival Guide, and contains lots of information about UFOs (Unidentified Flying Objects), including reports of aliens abducting people. Well, I’m not sure about alien abduction, but I had to abduct and remove some info from this section to shorten it. 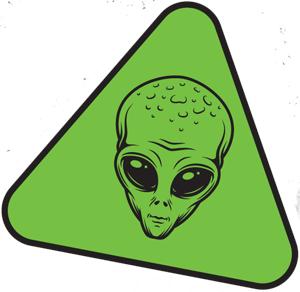 Other UFOlogists have added to the scale over the years. These extra classifications are not as well known and are rarely used. Whereas Hynek’s scale doesn’t assume the occupants of a UFO are aliens, some of these extra ones do. They are often seen as going a bit over-the-top.

Close Encounters of the Fourth Kind
This is when someone is abducted by a UFO.

Close Encounters of the Fifth Kind
This is when there is direct communications between humans and aliens.

Close Encounters of the Sixth Kind
This is where a human or animal has died as a result of a UFO encounter.

Close Encounters of the Seventh Kind
This is where an alien/human hybrid has been created.

While the final book has got some information about the US Air Force investigations into UFOs, this more detailed breakdown of the various projects ended up being removed…

The aim of the project was to evaluate UFO sightings on the basis of whether they were a threat to the USA. They did at first consider the possibility that some UFOs might be Soviet secret weapons, but this was eventually dismissed. Most sightings were shown to have ordinary causes. While some appeared that they might be aircraft of some sort, there was not enough information to determine their origin. At the end of the project, it was decided that further investigation was needed.

Project Blue Book took over after the conclusion of Project Grudge, but was to take a more serious scientific approach to the investigations. The project collected over 12,000 UFO reports and determined that most of them could be explained as natural phenomena. There were some reports that were caused by flights of formerly secret reconnaissance planes. But there were a small number of reports that were classified unexplained. Despite this, they eventually concluded that no reported UFO sighting was a threat, and that there was no evidence of advanced technology or alien involvement.

Chapter 2: Look! Up in the Sky! includes some information about drones. But this was drastically cut down from the original draft. Here’s the extended version…

Drones are pretty common these days. Anyone can go out and buy a drone, then fly it around their neighbourhood. But unmanned aerial vehicles (UAVs), have been around for a long time. In fact, in terms of military use, they’ve been around since WWI. Back then, they were remote controlled planes. But military and then commercial uses saw them getting smaller and smaller, and more sophisticated. Eventually, affordable consumer drones became available, starting with the French-made Parrot AR Drone in 2010.

Imagine how many UFO sightings over the years have been the result of secret drone testing, either by the military or by commercial companies.

As drones became more available, more and more UFO sightings could be attributed to them. In fact, in November 2013 the Huffington Post ran an article titled “Drones Causing Worldwide Spike In UFO Sightings”.

But as people became accustomed to seeing drones flying about in our skies, the number of reports have dropped. People seeing strange lights at night or objects whizzing about overhead in the daytime are more likely to simply dismiss them as “probably just a drone”. And anyone convinced of seeing a UFO, is likely to get that same response from others.

In November 2020 mysterious lights were seen in the skies of Milwaukee, USA. They flew in formation and even created complex patterns. Although people may have been a little confused or startled at first, there was no panic. No mass reporting of UFO sighting. No claims of alien invasion. People simply stopped and watched, assuming them to be drones. And they were right. It was a fleet of over one hundred specialised drones practicing for the upcoming MK Holiday Light Show.

But drones are creating their own mysteries and problems. In December 2018, two unauthorised drones were spotted in the grounds of Gatwick Airport in the UK. A further six sightings were reported over the next half hour. Drones can be a hazard to planes, so incoming flights were immediately diverted and outgoing flights were grounded until the drones could be located. But they were not found. The airport ended up being shut down for two days while police investigated. The mystery of the unauthorised drones was never solved.

The word ‘drone’ means to make a continuous low humming noise, which is what drones do. Is this how they got their name? Well, no… it was actually this…

The mindless bees that swarm in a hive, under the control of the Queen, are called drones. And they gave their name to the mindless flying machines controlled by a person elsewhere via remote control.