Another blog post in my series examining all the stuff that got cut out of The Supernatural Survival Guide before its publication. In this installment, I’ve collected together my favourate bits that disappeared from the book’s third section FROM BEYOND THE GRAVE.

First up, here’s a bit of historical info that faded away from Chapter 10: Spooky Stuff…

The Ghost Club is the oldest ghost hunting organisation in the world, growing out of a previous organisation, the Cambridge Ghost Club, formed by Trinity College students in 1855. It has a bit of an off-again-on-again history having disbanded in the 1870s, but reformed in 1882, disbanded again in 1936 and reformed again in 1938, disbanded a third time in 1948 and rising again from the dead in 1954… and has been going ever since.

Prior to 1993, membership was by invitation only. Anyone is now able to apply for membership, but there is an extensive questionnaire involved as they are only interested in joining people who are genuinely interested in ghosts and ghost hunting. 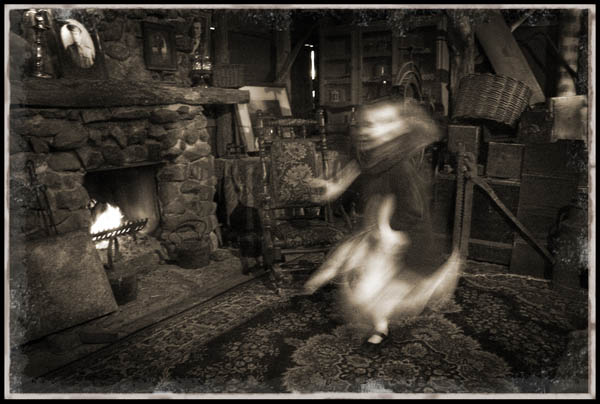 Chapter 11: Hauntings was quite full, so I ended up having to lose all the info about haunted prisons…

Located on a rocky island in San Francisco Bay, Alcatraz was originally an army fort and prison, becoming a federal penitentiary in 1934. Nicknamed “The Rock”, it was a high security facility for the worst criminals. The prison closed down in 1963 and is now a tourist attraction.

Many prisoners were killed while trying to escape from Alcatraz, while many others died there due to the harsh conditions. The ghosts of these prisoners are said to still haunt the cells and corridors. Clanging and the sounds of running feet have been heard at night. Disembodied voices and screams have often been reported. And the sound of banjo music has been heard coming from the cell of the prison’s most notorious inmate – gangster Al Capone spent much of his time there playing his banjo.

Operating as a prison between 1842 and 1929, Old Melbourne Gaol imprisoned and executed some of Australia’s more notorious criminals, including bushranger Ned Kelly. A total of 133 people were hanged there, and many died due to disease and mistreatment. It is now a museum and tourist attraction.

Eerie noises and spooky figures have been heard and seen at this prison many times since its closure. It is supposed to be haunted by the ghosts of the prisoners who died there and has a reputation of being one of Australia’s most haunted locations. The most often reported ghost is that of Elizabeth Scott, the first woman to be executed in the state of Victoria in 1863.

Situated on the edge of a moor, it was built by prisoners in 1779 and closed in 1927. Over the years, it played host to many public hangings. It is now a tourist attraction.

There have been many ghost sightings over the years and numerous ghost hunters have investigated the buildings. The jail has also played host to a paranormal conference in 2018, attracting ghost hunters from around the world.

Also from the same chapter, is this little bit of weirdness…

An ossuary is a place to store bones. An ossuary was built along with a church in Sedlec to house the bones of the thousands of people who had died during the plague in the 14th Century. But in 1870, those bones were bleached and carved by an artist who used them to decorate the ossuary, lining the entire room with them. He even created a chandelier, which supposedly contains at least one of every bone from the human body. And if that isn’t creepy enough, the Sedlec Ossuary is supposed to be haunted. Why am I not surprised?

Chapter 12: Chatting with the Dead includes information on mediums and also on the sceptics who debunked many of their claims. Some of this ended up being left out, including the following…

Escapologist Harry Houdini (1874-1926) was close friends with Sherlock Holmes author, Sir Arthur Conan Doyle (1859-1930). For many years they had a friendly rivalry over spiritualism. Doyle was an ardent believer in spiritualism while Houdini exposed fake mediums by replicating their tricks. Doyle explained this away by claiming that Houdini was in fact a medium himself and that he just didn’t realise it. Despite their difference of opinion, they remained friends until one incident caused a rift in June 1922.

Doyle’s wife, who was a medium, supposedly contacted Houdini’s dead mother and passed on her message to him. The message was inconsistent with Houdini’s mother and Houdini was offended by the attempted trickery. As a result his friendship with Doyle ended.

NOTE: The character Sherlock Holmes is all about using logic to solve things. Funny how his creator seemed to lack logic when it came to spiritualism.

Randi was a stage magician (performing as The Amazing Randi) and sceptic. He exposed all sorts of supernatural claims, including mediums. He wrote extensively, documenting the techniques used by mediums to trick people. Together with science writer Martin Gardner, he formed the Committee for the Scientific Investigation of Claims of the Paranormal (CSICOP), later renamed the Committee for Skeptical Inquiry (CSI).

He also formed the James Randi Educational Foundation (JREF), which offered the One Million Dollar Paranormal Challenge – the foundation would pay US$1 million to anyone who could demonstrate supernatural abilities under agreed-upon scientific testing criteria. No one ever successfully undertook the challenge. Randi made open invitations to a number of prominent mediums to undertake the challenge, but they all refused.