DVD Review — Doctor Who: The Daemons 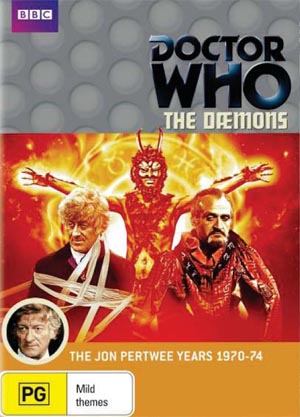 I have been eagerly awaiting the release of this classic Doctor Who story. It has been many years since I last watched “The Daemons”, and I’m very pleased to say that it definitely lives up to my memories of it. Mixing black magic and pseudo-science to create a wonderfully atmospheric five-part story, this is early-70s Doctor Who at its best.

The final story of the eighth season of Doctor Who from 1971, “The Daemons” features Jon Pertwee as the third Doctor and Katy Manning as his assistant, Jo Grant. This story falls smack-bang in the middle of the Earth-bound era in which the Doctor was scientific advisor to U.N.I.T. — the United Nations Intelligence Taskforce — a special military organisation set up to deal with alien threats. So there’s lots of action and adventure coupled with a rather intelligent plot.

The Doctor and Jo head to the small English village of Devil’s End, where an archaeologist is about to open ‘the devil’s hump’, a local burial mound. Opening the burial chamber releases a force mistaken by many for a demonic power. Of course, the Doctor knows better — it’s not occult forces at work, it’s alien science. We soon discover that the Doctor’s nemesis, the Master, is skulking around, trying to summon up a Daemon — an ancient alien creature visiting Earth from the planet Daemos, occasionally assisting humanity as an experiment. It seems that the Daemons see humanity as an experiment that has gone wrong. Now, will the last of the Daemons destroy the failed experience, or pass on control to the Master. What a choice!

“The Daemons” is an interesting story in that it attempts to give scientific explanations for supernatural occult happenings. It is as successful as it is because it doesn’t try to give too specific an explanation. The occult elements work very well in setting up a wonderfully atmospheric story with great imagery, that at times has the feeling of an old horror flick. At five episodes it is also a surprisingly pacy story that never feels padded or long-winded. And I love the fact that the Daemon isn’t actually evil (that role is left for the Master) — rather, it is simply amoral, viewing humanity as beneath consideration.

Set-up, characters and atmosphere are definitely the strong points of this story. The only real weak point is the resolution, which I didn’t find quite convincing. But the rest of the story is so damn good that I happily forgive it this fault. The special effects stand up pretty well, with the enlarging of the Daemon being the only one that doesn’t work all that well, but given it was made over 40 years ago I’m willing to be lenient.

The cast, as with many Pertwee-era stories, is rather BRILLIANT. Pertwee is in top form, delivering witty lines with aplomb, riding around on a motorcycle and doing his own stunt falls. Katy Manning is also good, with Jo at her most loyal and self-sacrificing. The U.N.I.T. team — Nicholas Courtney as the Brigadier, John Levene as Sargent Benton and Richard Franklin as Captain Mike Yates — are given lots to do and they do it well. In many ways this is an ensemble story that gives each of them a moment to shine, with some wonderfully written interactions. The final exchange between Yates and the Brig, as the Maypole dancing begins, is an absolute classic…

Yates: ‘Fancy a dance sir?’
Brigadier: ‘Kind of you Captain… I think I’d rather have a pint!’

This story also sees the return of Roger Delgado as the Master. He was, during this era, a semi-regular, returning story after story to challenge the Doctor. And rightly so. He is the definitive Master, with no other coming even close until John Simm took on the role during the Tennant era. The guest cast is also great, particularly Damaris Hayman as Miss Hawthorne, the self-proclaimed white witch. She is convincing and sympathetic, and her flirting with Sergeant Benton is hilarious.

“The Daemons” is a two-disc set with lots of extra features. The commentary, which gathers Katy Manning, Damaris Hayman, Richard Franklin and director Christopher Barry, is a gem. There is a wonderful chemistry between these people, which results in an entertaining, friendly and fun commentary. Other extras include a making-of doco, a doco about producer Barry Letts, some silent 8mm footage from the location shoot, and the initial colourisation test from the 1990s (the original colour tapes of this story were junked by the BBC and all that remained was a Black&White print), along with a segment from Tomorrow’s World about the colouring process. As usual there is also a set of photos. These sets are often a little pedestrian with nothing but standard publicity shots… but this set is particularly good for all the behind-the-scenes pics, including a lovely series of shots where Jon Pertwee jokingly attempts to sneak up on and stab the sound man. If you don’t usually bother with the stills, make an effort to give this set a look.

My only disappointment with the extras, is that they did not include “Return to Devil’s End”, a doco made back in the 1990s, which I would dearly have liked to see. But given that this doco was not a BBC production, I assume there may have been rights issues.

All up this is a brilliant release — An exceptionally good story for the casual viewer, and lots of additional material for the fans. Highly recommended!

Doctor Who: The Daemons will be released on DVD in Australia on 19 April 2012 by Roadshow Entertainment.