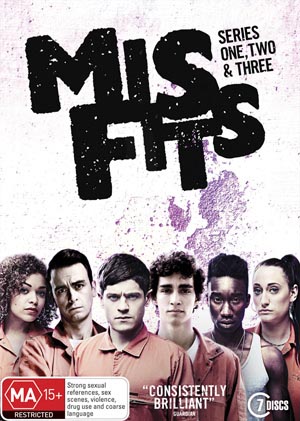 Five young people doing community service get caught in a freak storm that ends up giving them bizarre superpowers. That’s the premise of Misfits, a humorous British science fiction series. It’s odd. It’s rude. It’s crude. And it is one of the most original shows I’ve seen in a long time.

I must admit that when I started watching Misfits, it came as a bit of a shock. It certainly deserves its MA 15+ rating, which warns: “strong sexual references, sex scenes, violence, drug use and coarse language”. But the bizarre premise and interesting plots soon had me taking the liberal doses of the F-word and the C-word in my stride.

Interestingly, I didn’t really like any of the characters after watching the first episode. But the intriguing nature of the premise kept me watching. And as I watched the rest of the episodes, I found myself getting to know the characters, sympathising with their dilemmas and yes, by the end of the first season, even liking them.

After the weird storm, each of the main characters ends up with a power that is in some way linked to their personalities and/or history. Curtis is a disgraced sporting hero, banned from running because of drug charges. He regrets his past decisions and ends up with the power to turn back time. Simon is a withdrawn young man who often finds himself being ignored. He ends up with the ability to turn invisible. The spoiled Alisha, used to getting her own way through sex, finds herself with the most bizarre of the powers — whenever anyone touches her, they have an uncontrollable urge to have sex with her. Kelly is a chav — full of herself, not all that intelligent and often hiding behind her attitude rather than communicating with people. She discovers that she can read minds. And finally we have Nathan — loud-mouthed, foul-mouthed and never taking anything seriously. He is mightily pissed off because he thinks he didn’t get a power. It’s not until he dies that he discovers that his power is immortality.

There is never any explanation as to how or why this mysterious storm bestowed these powers. And as the series progresses we learn that lots of other people were also affected by the storm. I like the fact that things aren’t fully explained. They don’t need to be. If the writers had gone into explanations of why people got these powers, the series may have ended up going in quite a different direction. Instead, we are as baffled as the recipients of those powers.

In the first season our band of unlikely heroes learn to cope with their new situations. Not only do they have to come to terms with their own powers, but they have to deal with the not-so-nice powers of others, as well as trying to keep their abilities a secret from the general public. To a large extent, the theme of this season is one of self-discovery.

Things change in the second season, as we are given a story arc involving a masked hero. Time travel plays an important role and a key new character is introduced. Seth is a former drug dealer, who now deals in super powers, as his power is the ability to transfer powers from one person to another, without the capability of using them himself. And so at the end of that season, our heroes acquire some new powers.

Season three changes things again. Nathan departs and is replaced by Rudy, a guy who literally splits into two separate people. Unfortunately, he is a very similar character to Nathan — loud, foul, never able to take anything seriously — but with none of the charm. His presence is one of the weak-points of this season. Meanwhile the rest of the gang is trying to get used to their new powers — the ability to see the future, rocket scientist knowledge, gender swapping and the ability to see through the eyes of others. This season is less-arch driven than the previous, with numerous stand-alone episodes that take on some well-worn science fiction plots, including — alternative reality where the Nazis win WW2 (well handled and rather chilling), body swapping (not so great) and zombies (lots of fun). But ultimately, Simon takes centre stage in the final episode, fulfilling his destiny and bringing to a close his story arc.

The main characters are very well cast, even if they are not all the greatest of actors. In the body-switching third season episode for example, Lauren Socha is rather unconvincing at playing a different character within Kelly’s body. Iwan Rheon as Simon is my favourite character. His performance is quite layered and the character goes through the greatest change and development over the course of the series. In many ways, I think the overall arc of these first three seasons is his story.

Given the rather dramatic end to the third season, it will be very interesting to see where the writers take this series next. A US version is also being planned which, I fear, may result in a wishy-washy, watered-down clone.

Each season is in its own plastic DVD case, with a cardboard slipcase for the three of them to slot into. There are some good extra features on the discs for seasons one and three, but oddly, nothing for season two. There is some really good behind-the-scenes stuff, especially with regards to special effects and stunts. And there are a couple of short films, originally released online, that fit in with season three. Unfortunately there are no commentaries, and I do wish that they had given the writing a bit of attention in the behind-the-scenes material. I would have loved to find out about how the creator plotted the series and why he made certain decisions.

All up, Misfits is really quite a unique series — big, bold, well-written and highly entertaining. And this is a great DVD set. Highly recommended!

Misfits is released on DVD in Australia by Roadshow Entertainment.