DVD Review — Doctor Who: The Face of Evil 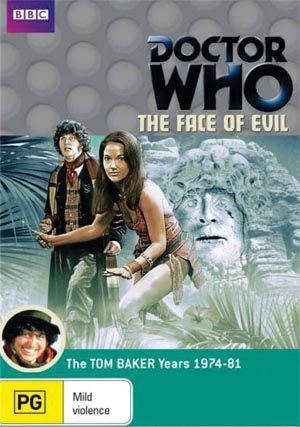 A new companion in a skimpy outfit, the Doctor’s past deeds catching up with him and a commentary on religion form the basis of the Doctor Who story, “The Face of Evil”. Despite a few problems, this is an entertaining and thought-provoking four-part story from the 14th season of Doctor Who, first screened in 1977.

Travelling alone, the Doctor arrives on a planet where a tribe of savages called the Sevateem, worship a god called Xoanon. Unfortunately for the Doctor, they think that he is “the evil one”, as it is his face that is carved into the side of the mountain where the Sevateem’s mortal enemies, the Tesh, supposedly hold Xoanon prisoner. Aided by Sevateem outcast, Leela, the Doctor soon discovers that both the Sevateem and the Tesh are the descendants of the crew from a crashed space ship — the Sevateem are descended from the Survey Team and the Tesh from the technicians. And as for the great god Xoanon? Well, he’s actually an insane computer. It seems that the Doctor had previously visited this planet, after the ship had crashed, and helped the crew repair their computer by linking his mind with it… but after repairs were complete, he forgot to wipe his personality print, causing the computer to develop schizophrenia. Now it’s up to him to put things right.

“The Face of Evil” is a really interesting story for a number of reasons. Firstly, the central problem is caused by the Doctor himself. The whole adventure — all the drama and death — is a result of the Doctor’s past actions. Secondly, the story is quite obviously questioning religion… not something you would really expect of an escapist series aimed at family viewing. And thirdly, of course, it introduces the character of Leela, who became the Doctor’s companion for the following eight stories.

For the most part, it is a well-paced, well-scripted story — although there are a couple of problems. The most obvious and annoying is the inconsistent use of the telepathic powers of the Tesh. If they are able to incapacitate people with the power of their minds, why do they end up relying on guns? Nevertheless, there is some brilliant dialogue to make up for these oversights.

“You know the very powerful and the very stupid have one thing in common. They don’t alter their views to fit the facts. They alter the facts to fit the views. Which can be uncomfortable if you happen to be one of the facts that needs altering.”

The production design and costuming is superb. The look of the planet, with all the forest scenes shot indoors on film, is great, and the use of technology remnants by the Sevateem as costume accessories and religious artefacts is very effective. Most of the visual effects are also quite good, particularly the invisible monsters and the mountainside with the Doctor’s face.

The acting is first rate. Tom Baker is in top form, as is Louise Jameson in her first story as Leela. The guest cast are all good, but it is David Garfield who steals the show as Neeva, the Sevateem’s religious leader. The scene in which he waves the religious relics around the captured Doctor is priceless.

What lets things down somewhat are the rather ineffectual action sequences, particularly any involving the Tesh handguns. They are a great example of how a cumbersome effects technique resulted in very daft-looking action — or non-action, in this case, as any time a gun is used, the person using it has to remain stock-still for several seconds. They would have been better off ditching the visual effect for the firing of the guns and just using a sound effect — as had been done in past Doctor Who stories with much better results.

This is a one-disc release in a standard case, but contains some wonderful extras. There is an excellent making-of doco, some interviews (past and present), some footage from the cutting-room floor and a hilarious toy advertisement. There is also a lively and entertaining commentary featuring Louise Jameson and several members of the crew and guest cast.

All up, this is a pretty good story and an excellent release.

Doctor Who: The Face of Evil is released on DVD in Australia by Roadshow Entertainment.