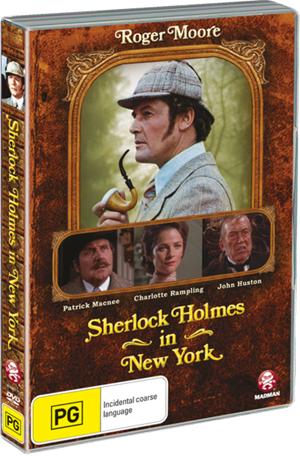 Thanks to the recent Sherlock television series and the Robert Downey Jr feature films, there has been a renewed interest in Sir Arthur Conan Doyle’s famed detective. So it’s not surprising that earlier adaptations are being released on DVD (see my review of The Sherlock Holmes Collection). A little OTT and certainly rather melodramatic, Sherlock Holmes in New York is, nevertheless, a fun addition to the long list of Sherlock’s screen adventures.

Released in 1976, Sherlock Holmes in New York sees the great detective head to America for an adventure not based on any of Doyle’s actual stories. Screenwriter Alvin Sapinsley has penned an original story, which, although entertaining enough, lacks the style and intelligence of Doyle’s plotting.

Holmes and Watson set off for New York when they realise that Holmes’s old love, Irene Adler, may be in danger. They arrive to discover that Moriarty has pulled off the crime of the century and has also kidnapped Adler’s son, Scott, to ensure that Holmes will keep his investigative nose out of the matter. But, of course, Moriarty is no match for Holmes, who sets out to rescue the boy and foil the plans of his old nemesis.

In this version of the Holmes story, Adler and Holmes are former lovers. It is never actually stated that Scott is Holmes’s son, but the script strongly points in this direction. It’s the one aspect of the film that didn’t sit quite well with me. I think I would have preferred a little more subtlety and ambiguity relating to the boy’s parentage.

Sherlock Holmes in New York is a made-for-television movie, but it seems to have been spared none of the expense or lavish attention one would expect for a feature film. While there is nothing outstanding about the cinematography, the sets and scenery of the 20th Century Fox back lot (using the streetscape constructed for Hello Dolly) fill the screen with sumptuous detail.

This film has an amazing cast. The main players include Roger Moore as Holmes and Patrick Macnee as Dr Watson, with Charlotte Rampling as Irene Adler and the legendary John Huston as Moriarty. But the supporting cast reads like a Who’s Who of Hollywood in the late 1970s and includes David Huddleston, Gig Young and Jackie Coogan. Also interesting to note is the casting of Moore’s son, Geoffrey Moore, to play Scott.

No one in this film is any danger of winning an Oscar for their acting, with the performances on the same melodramatic level as the other elements of the film, but they do all throw themselves into the roles with enormous gusto. As Moore himself points out in the commentary, it mattered little whether he was playing James Bond, Simon Templar or Sherlock Holmes, as he approached them all the same way. Watching Huston and Moore in their scenes together is highly amusing, as they each attempt to outdo the other in chewing up the scenery. Moore and Macnee have a nice chemistry, although Watson tends to be played for laughs and is a dumbed-down version of the character Doyle wrote.

This is a one-disc release in a standard plastic case, with commentary and stills gallery being the only extra features. The commentary, however, is excellent. Sir Roger Moore reminisces about this film and many other things in what is actually a cross between a commentary and an interview.

If you’re a Sherlock Holmes purist, then this film might not be your cup of tea. But if you don’t mind a fun, melodramatic interpretation, then you could do a lot worse than Sherlock Holmes in New York.

Sherlock Holmes in New York is released on DVD in Australia by Madman.