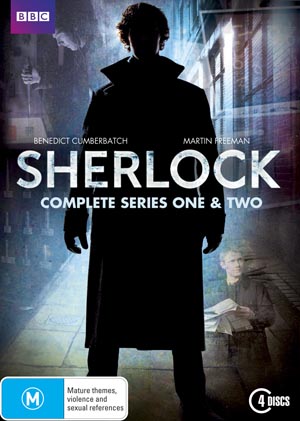 Noted Doctor Who scribes Steven Moffat and Mark Gattis have teamed up to create this updated version of the adventures of Sir Arthur Conan Doyle’s famed detective, Sherlock Holmes. Sherlock is a thoroughly modern series, yet it is extremely faithful to Doyle’s characters and the essence of his stories — stylish, smart and utterly addictive, it leaves you desperate for more.

Transplanting Holmes and Watson into the 21st century, this series uses Doyle’s stories as inspiration for modern equivalents, rather than simply adapting the plots. In fact, most of the episodes draw on more than one of Doyle’s stories, even when there is clearly one story that is the main focus. This series also draws on previous adaptations for inspiration, particularly the Basil Rathbone films and The Private Life of Sherlock Holmes.

Sherlock has quite a distinct style with the use of text superimposed over the images. This is used whenever text messages are sent via mobile phone and also when Holmes is making deductions, thus allowing the viewer insight into his thought processes. It’s a very effective storytelling device and lends a unique visual detail to the series. This is coupled with some extraordinary cinematography. Every episode is like a feature film, and definitely benefits from being viewed on hi-def Blu-ray. Season two’s “A Scandal in Belgravia” is a definite visual highlight, with Holmes ‘stepping into’ the crime scenes as he relates the sequence of events.

The casting in Sherlock is absolute perfection. Benedict Cumberbatch gives us the best Sherlock Holmes since Jeremy Brett. He is intellectual, cool, calculating and utterly brilliant, but also lacking in empathy (verging on sociopathic) and utterly clueless regarding the emotions of others — and yet somehow, Cumberbatch makes him likeable. Martin Freeman’s performance as Dr John Watson is warm and sympathetic. Although by no means Holmes’s intellectual equal, he is nonetheless, portrayed as smart and savvy. Most importantly, these two actors have a terrific chemistry on screen. You can see the friendship develop between Holmes and Watson. It is believable and helps to make Holmes likeable.

All the other characters, from Mrs. Hudson to DI Greg Lestrade, are given as much attention as the principals. Its worth mentioning that co-creator Mark Gattis (who, as an actor, can sometimes overplay a role) gives a wonderfully wry performance as Sherlock’s brother Mycroft. But it is Andrew Scott as Jim Moriarty who pulls focus. Every bit as intelligent and calculating as Holmes, he is definitely his equal. Again, it is the on screen chemistry between him and Holmes that adds so much to the series. There is a sense that they are two sides of the same coin — that Holmes could be Moriarty and vice versa.

Each season is comprised of three 90min episodes, and each season ends with a cliff-hanger (which I won’t reveal here). The season one finale, “The Great Game”, introduces Moriarty in a wonderfully tense story where he poses deadly challenges for Holmes. The cliff-hanger, however, didn’t quite work for me. It seemed a little contrived and was the low-point in an otherwise excellent episode. (But it’s all relative… ‘low-point’ in Sherlock is still equal to ‘high-point’ in most other TV shows.) The second season cliff-hanger, on the other hand, is exceptionally well handled and mirrors the conclusion of Doyles “The Final Problem”. Thankfully, a third season has already been announced.

Each season has two discs presented in standard, plastic Blu-ray cases within a cardboard slipcase. The extra features are very good, with a making-of doco for each season, plus some informative and amusing commentaries featuring Moffat, Gattis, producer Sue Vertue and various cast members.

Sherlock is ABSOLUTELY BRILLIANT! I hereby bestow upon it the highest of possible recommendations!

Sherlock is released in Australia on DVD and Blu-ray by Roadshow Entertainment.

DVD Review — Doctor Who: The Face of Evil School Tour