DVD Review – Doctor Who: The Power of the Daleks (colour version) 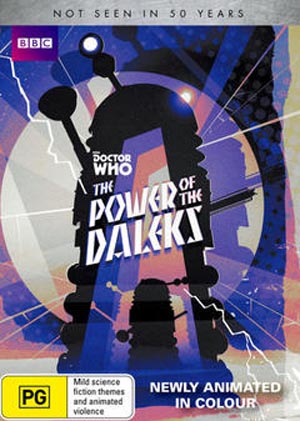 The Power of the Daleks, lost for many years due to the BBC archival purge, is now available with the surviving soundtrack matched with animation, recreating the action of the original. Not only has this story been released in black and white (like the original) but also in colour. But is this a good thing?

I’ve already reviewed the story and the black and white animation (see review), but to summarise — great story, not so great animation. The animation is limited and the illustration style problematic, with facial shading sometimes looking more like bruising. I found this distracting.

When I heard that a colour version was being released, I was sceptical. The whole idea of these animated replacement eps is to recreate the originals as closely as possible. Those lost eps are in black and white, so it seems appropriate to have the animation match. So I approached the colour rendition warily.

As it happens, I reckon the colour one is better. The shading no longer looks like bruising and the animation generally seems to look better. All of this makes me wonder if it was designed to be in colour, hence the black and white version not looking as good. If this is the case – what a shame! I would much rather have had a decent black and white version. Because no matter how much better the colour one appears, it takes it a further step away from the originals.

I guess, given the choice, I would buy the colour version… you can always turn the colour down and watch it in black and white if you want. Personally, I would have liked to have both in the one release.

Doctor Who: The Power of the Daleks (colour version) is released in Australia on DVD and Blu-ray by Roadshow.

Podcasting through time and space More FLIP MEs out today!