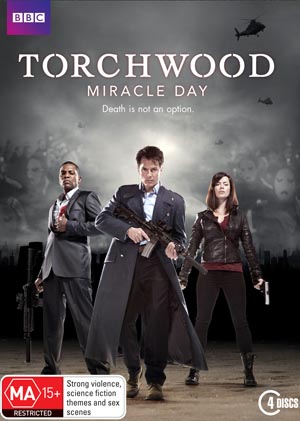 “Miracle Day” is the fourth season of Torchwood, the BBC’s Doctor Who spinoff series for adults. It had quite a mixed reception when it aired, with many fans being rather disappointed. It’s quite different from the previous seasons, but is still an enthralling, dramatic, thought-provoking, heart-pounding, well-written, well-produced set of episodes. I really enjoyed “Miracle Day”!

Torchwood is a really interesting series that has evolved quite a bit since it’s beginning as a Doctor Who spinoff, following the adventures of the immortal Captain Jack and the last branch of the Torwood Institute (set up by Queen Victoria in a Doctor Who episode). The first season, made up of 13 individual episodes, did not start off too well. It seemed obsessed with proving that it was aimed at adults… so we were given sex, violence, swearing and even a woeful story about an alien intent on humping as many humans as it could. Thankfully, by the end of the season, it had settled down somewhat. The second season was a definite improvement. This time there was a season story arc, although the episodes were still individual stories. Things changed rather dramatically for the third season. Titled “Children of Earth”, it was a one-story, five-part mini-series. And it was utterly brilliant. It was everything Torchwood should have been right from the start… it’s adult nature derived from mature and somewhat disturbing story concepts and themes, rather than from cheap thrills.

“Miracle Day” sees even more changes. It’s no longer a solo BBC production. Creator Russell T Davies has taken this season to the USA in a co-production deal with the Starz Network. Made up of ten episodes, it is one large story containing smaller related stories within.

One day, no one dies. People start calling it “Miracle Day”. But it’s more than one day — it appears to be a permanent change. All over the world, people have stopped dying. They still get sick, they still get injured, they still feel pain… but they keep on living. CIA agents Rex Matheson (Mekhi Phifer) and Esther Drummond (Alexa Havins) begin to investigate. Their investigations soon lead them to the last two members of the now-defunct British secret institute, Torchwood. After a bumpy start, Captain Jack (John Barrowman) and Gwen Cooper (Eve Myles) set about helping Matheson and Drummond.

It seems that since everyone else on Earth became immortal, Jack became mortal. And there are mysterious people out to get him. Our team soon discover that the miracle was no accident — it was expected and prepared for by a certain drug company. In fact, it was orchestrated. But who is behind it all? What has Jack got to do with it? And can it be reversed before the world becomes over-populated?

It’s a great concept for story! And for the most part, it is well executed. I only had one problem with “Miracle Day” — a rather obvious and annoying plot inconsistency. In the first few episodes it is established that when people don’t die, they remain conscious… no matter what. So, a woman who has her neck broken is still running around (although with her head twisted backwards), and a guy who gets blown up is still watching the doctors at his own autopsy. Really creepy stuff! But then a few episodes in, without any explanation, people now happily lose consciousness at the drop of a hat.

Aside from that inconsistency, I loved “Miracle Day”. One of the strongest story points is how the world tries to cope without death — how current medical infrastructures prove to be inadequate; how governments step in and start to classify people according to whether they should be dead; how bureaucracy thrives as society breaks down; how governments seeks to attain control over death. Some rather frightening concepts are explored. The media is also put under the spotlight, as convicted paedophile and child killer Oswald Danes (Bill Pullman) suddenly becomes a world-wide celebrity.

I’ve always considered John Barrowman to be the weakest of the Torchwood team, as his acting style tends towards the OTT, particularly in the more dramatic moments. Happily, his performance in this season is considerably more restrained and believable. Eve Myles is good as Gwen and it’s great to see Kai Owen return as her long-suffering husband. The two new CIA agents are also good, if unremarkable. But the standout performance of “Miracle Day” is provided by Bill Pullman. Usually cast as the all-American good guy (remember him as the US President in Independence Day) he is wonderfully ambiguous and creepy as Oswald Danes.

Some of guest cast are also worth a mention. Arlene Tur puts in a very sympathetic and likeable performance as Dr Vera Juarez. Lauren Ambrose (Six Feet Under) gives a wonderful performance as the PR person without a conscience, who ends up managing Oswald Danes. John De Lancie (Q from Star Trek: The Next Generation) shows up in the later episodes as the no-nonsense head of the CIA. And we even get former teen-star and B-movie actor, C Thomas Howell, as a hired assassin.

It’s really interesting seeing how the focus of the series has shifted to America. Although parts of the series are still set in the UK, America is the driving-force of the plot. We also get more guns, bigger explosions and more expensive effects than in previous UK-bound seasons. This is not necessarily a bad thing, but it does give this season a rather different feel. The fact that it’s made with the US audience in mind, who may not necessarily be familiar with past seasons, they have made sure that viewers don’t need to see the previous seasons to understand and follow “Miracle Day”.

All up “Miracle Day” is a thoughtful, exciting, entertaining and sometimes disturbing season that is another step in the development of Torchwood. It will be interesting to see where things go from here. The end of this season certainly sows enough seeds for more Torchwood… although there is also a distinct opening for a new US-based spin-off series.

The four-disc DVD release is very nicely presented in a foldout case, within a slipcase. The only problem with the packaging is the lack of any info on the contents of each disc. So if you want to watch a particular episode or extra, you need to guess which disc it’s on.

Lots of good extra features are included on this release. The most interesting is the so-called motion comic, “Web of Lies”. This is a sort-of prequel story done with limited animation and originally released online. The animation is stylised and distinctive, but the likenesses of the characters are rather poor. It’s an interesting story with much potential, but it is rushed and disjointed, with several bizarre leaps in logic. Although worth a watch, it is, in the end, rather unsatisfying.

Other extras include a behind-the-scenes doco, a special effects featurette, character profiles and some fairly boring deleted scenes. The commentary on the first and last eps, from Russell T Davies and his fellow executive producer Julie Gardner, are informative and entertaining and remarkably honest. They chat away like old friends, discussing the differences between working in the US and the UK. And they have no qualms about discussing the season’s failures as well as its triumphs… and occasionally laying blame. Each episode also features a short introduction from Russell T and John Barrowman. They are rather pointless and a little pre-emptive at times.

“Miracle Day” is a great watch and this is an excellent DVD release. Highly recommended… even if you’re not a Torchwood fan.

Torchwood: Miracle Day is released in Australia on DVD and Blu-ray by Roadshow.

And don’t forget… There are still a couple of days left in our Doctor Who giveaway. For your chance to win a copy of Doctor Who: The Complete Sixth Series, follow this link. 🙂