DVD Review — Doctor Who: The Sensorites 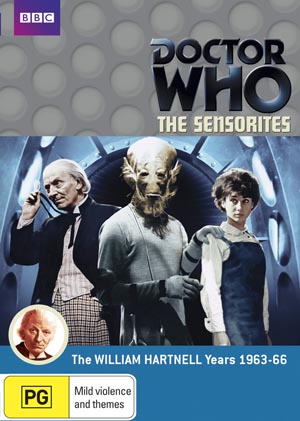 “The Sensorites” is a six-part story from the very first season of Doctor Who, way back in 1964. While it has an interesting concept, and some really good moments, it suffers from being rather long and boring.

The Doctor (William Hartnell), along with his granddaughter Susan (Carole Ann Ford) and schoolteachers Ian (William Russell) and Barbara (Jacqueline Hill), land aboard an Earth space ship trapped in orbit around a mysterious planet called the Sense-Sphere. The planet’s inhabitants, the Sensorites, are keeping the ship and its crew imprisoned. The Sensorsites had a bad experience with a previous Earth expedition and so are now wary of all humans, fearing that they have come to plunder their planet’s supply of Molybdenum. The Sensorites cut out and steal the lock from the TARDIS, thus stranding the Doctor and Co. The Doctor is soon negotiating for the release of his lock and the humans, while also trying to cure the Sensorites of a mysterious disease that is ravaging their planet. And if that’s not enough… add in some corrupt Sensorites and the insane, hidden survivors of the previous Earth mission.

“Weakling! Betrayer of our people! Coward! I should imprison you in some room wherein no light can shine and fill that room with noise!”

It all sounds really exciting. And the basic idea of the story is really good, especially its focus on xenophobia. Unfortunately the story is way too long, with obvious padding and interminably long scenes that go nowhere. In fact, the first two episodes, set aboard the Earth spaceship, do little to progress the story — they could easily have been condensed into half an episode. It’s not until they head down to the Sense-Sphere in episode three that the story really gets moving. And even then, there are plot-holes, hard to swallow moments and much unnecessary waffle. All up, it’s interesting but rather tedious.

This story is, oddly, directed by two different people. Associate producer Mervyn Pinfield directed episodes 1-4, while Frank Cox did episodes 5-6. There are some really nice directorial moments, such as when the crew of the TARDIS exit out through the doors and directly into the spaceship, all in one shot. Awesome! And then there’s the first arrival of the Sensorites — a very eerie, silent scene with a mysterious alien outside the spaceship window. But these wonderful moments are let down by the clunky staging and clumsy movements of other scenes. The look and feel of the sets is quite good and the Sensorites themselves are simple but effective.

The best thing about “The Sensorites” is the performance of the regular cast. William Hartnell, in particular, is in top form, while Susan actually gets some useful and interesting stuff to do, instead of just getting into trouble and screaming.

My review disc was unclothed, but I would assume it comes in the regular plastic DVD case with extensive notes on the sleeve. There’s not a huge amount on this disc in terms of extra features. There is no ‘making-of’ or ‘behind-the-scenes’ doco, which is very disappointing. There’s an overly-long featurette in which writer/actor Toby Hadoke goes in search of information about Peter R Newman, the mysterious scriptwriter of “The Sensorites”. There’s a couple of other little things, including an interview with vision mixer, Clive Doig.

The lack of extras is partly made up for with the commentary. Eight people come and go over the course of the six episodes — William Russell (Ian), Carole-Ann Ford (Susan), Ray Cusick (designer), Joe Greig (Sensorite), Frank Cox (director #2), Sonia Markham (make-up), Martyn Huntley and Giles Phibbs (two of the human survivors). There was a real danger of this commentary degenerating into a bunch of old people trying desperately to think of something interesting to say. But it’s saved by Toby Hadoke, who mediates and expertly steers the conversation. So the commentary ends up being a lot more interesting than the actual story. We get all sorts of great little tidbits, including how director #2, loved giving close-ups to one of the guest cast (Ilona Rogers) because he had a crush on her.

Although an interesting insight into Doctor Who history, I’m afraid “The Sensorites” is a release best left for the die-hard fans.

Doctor Who: The Sensorites is released on DVD in Australia by Roadshow.