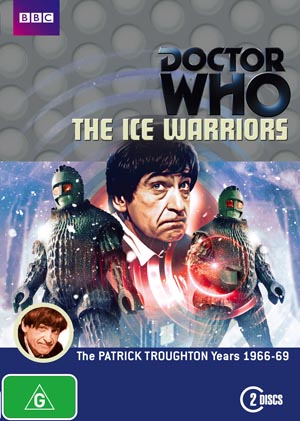 With the assistance of animation to replace the two missing episodes, “The Ice Warriors” finally sees the light of day with a DVD release. This is vintage Doctor Who from the Troughton era and is noteworthy for the debut of the Ice Warriors, who would return a number of times in the classic series and who recently made their first appearance in NuWho.

The third story of Season 5, “The Ice Warriors” was initially transmitted in 1967. Since then, two of its episodes were lost during the BBC’s archival purge. The story did get a VHS release many years ago, with some linking narration and dialogue to replace the missing episodes. But now these two episodes have been animated and used with the original soundtrack, which thankfully still exists.

The Doctor, Jamie and Victoria land at the brink of a new ice age, where humanity is attempting to hold back the onslaught of approaching glaciers with ionisers. Deep within the ice, they discover an alien warrior, frozen for thousands of years. Once thawed out, this Martian Ice Warrior sets out to release his comrades and conquer the Earth.

“The Ice Warriors” is not the greatest of stories, and is most memorable for the introduction of the titular monsters who would go on to better adventures in the future. The setting and back-story are interesting but the actual plot is a bit thin and meandering. It’s not bad. It’s just not great. The Ice Warriors themselves, however, are a terrific creation, fascinating in so many ways — from their physical design, to their hissing voices; from their origins on Mars, to their warrior natures. The dangers of becoming reliant on technology is a interesting theme that runs through the story and provides some good bits of dialogue.

“He’s got a printed circuit where his heart should be.”

One of the highlights of this story is the design. The production design is excellent — from the ice caves to the interiors of the human base, set up in a historic building. The costume design is also great. The Ice Warriors, though a bit cumbersome, are a wonderfully threatening and interesting creation. And the uniforms of the personnel in the human base are unusual, if a little sexist in a typically 60s way.

The guest cast do a great job, particularly Peter Barkworth as Leader Clent. And the regulars are in top form.

The animation of the two missing episodes is good. Although limited, it is quite effective, and it fits in well with the look and feel of the live action episodes.

The commentary for this story is worthy of note. Some cast and production crew do a standard commentary on the live action episodes, with Toby Hadoke moderating… but the animated episodes are different. The first has a selection of interviews cut together and presented by Mr Hadoke. They are interesting but a little disjointed. The second ep has him chatting to Patrick Troughton’s son, Michael. Although a good listen, is does at times come across as an ad for Michael’s book about his father.

All up this is a good release. It’s a must have for Who fans and but not the story I’d use to introduce newbies to the Troughton era.

Doctor Who: The Ice Warriors is released on DVD in Australia by Roadshow Entertainment.