In August this year, I went on a speaking tour of remote schools in rural Western Australia. I wrote about it in a blog post (see: Touring WA). At Mt Margaret Primary School, I ran two story structure workshops and got kids to help me plot out stories. Yesterday I posted the story that resulted from the plotting of the Grade 4 and 5 group (see: Stories from WA, Part 1: Dean and the Zombies). Today, I present for your enjoyment, the story plotted out by the Grade 6 and 7 group.

Here’s the story line as plotted out on the whiteboard… 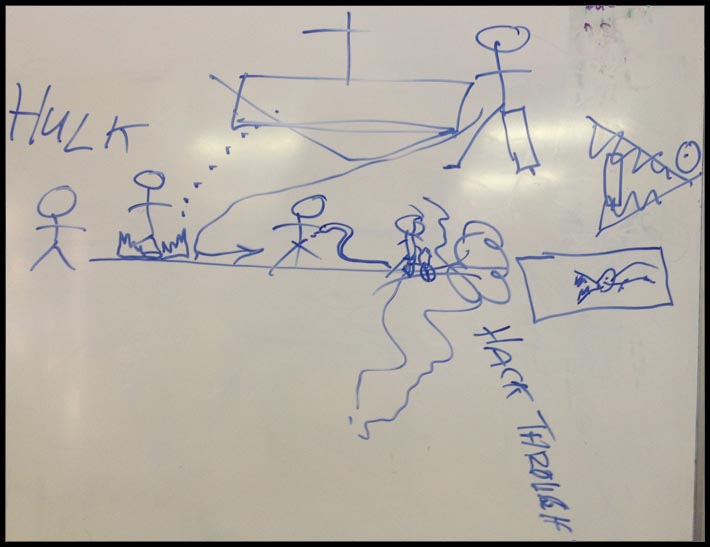 And here’s the final story…

Once upon a time there was a boy named Hulk. Hulk loved to swim. And so, one particularly hot Summer’s day, he set out to visit the local swimming pool. It was a journey that should have been simple; a journey that should only have taken a half hour at most. But fate had other plans this day.

Hulk set off on the path to the pool, little expecting someone to have hidden a bear trap in the middle of the path, covered by leaves and rubbish. As his feet crunched down on the dry leaves, the metal jaws of the trap snapped shut on his left leg, snapping the bones like twigs and piercing his flesh.

Hulk fell to the ground. He tried to pries open the trap, but the steel jaws wouldn’t budge. He was loosing a lot of blood. He had to get to the hospital, fast. Being a swimmer, Hulk had great upper body strength, and was able to perform an amazing feat of daring — he pushed himself up into a handstand and walked all the way to the hospital on his hands.

Unfortunately, the resident surgeon was away and so Hulk had to be treated by a nurse instead. She decided that the only course of action was to amputate the leg.

Hours later, Hulk walked out of hospital on a brand new wooden leg. It meant that he now had a limp… but he wasn’t going to let that stop him from having a swim — after all, it was a hot day and he needed to cool down. He resumed his journey to the pool.

It was not long, however, before Hulk encountered a vicious snake with the deadliest of poisons dripping from its fangs. The snake launched itself at Hulk and bit deep into his leg. Luckily for Hulk, it was his wooden leg. The snake was furious, but it was also stuck.

Hulk continued on, the angry, writhing serpent swinging from his wooden leg as he limped.

Hulk was now close to his destination. He could see the sports centre that housed the swimming pool. He was about to cross the road to the pool, when the ground began to shake violently. It was an earthquake! Hulk was thrown to the ground as the bitumen in front of him split apart.

As the shaking subsided, Hulk got to his feet and peered into the crevice. There was no way he was going to be able to get across. But then the ground shook again. It was a second earthquake!

Hulk watched, wide-eyed, as the large tree on the nature strip fell over… right across the fissure in the road. Nature had given him a solution to the problem it had created… a bridge over troubled bitumen.

But Hulk was worried. Could he cross this precarious overpass with a wooden leg? What if he slipped and fell? He needed a safety rope. But where would be get one? Then his eyes fell on the still writhing snake attached to his wooden leg. It was quite a long snake. It might just do the trick.

Hulk grasped the snake’s tail and tied it to one of the tree branches. Carefully, he then walked across the tree trunk. Reaching the other side, he tried to untie the snake knot… only to find that he had tied it too well. Looking around, he spotted a knife on the ground. He picked it up and hacked at the snake, cutting it in half.

Finally, Hulk reached the pool. Not even bothering to change, he plunged into its cool depths. The wooden leg, with the still attached half-a-snake, made swimming a little tricky, but Hulk didn’t mind. He was just happy to be in the water.

As he drifted on the surface, he saw something swimming towards him. Something green, scaly and reptilian. Hulk’s eyes widened as the gigantic crocodile reared its ugly head out of the water. It opened its maw, edged with razor-sharp teeth, ready to devour him in one chomp. He had to think quick! With lightning fast reflexes, Hulk whipped off his wooden leg and rammed it into the crocodile’s open mouth.

The croc howled with frustration as it couldn’t close it jaws. It thrashed about, throwing itself this way and that, until it finally slunk out of the water and back to its nearby swamp.

Hulk swam to the end of the pool and rested his head on the edge. What a day! And all because he had wanted a swim. “Maybe,” he thought, “I should take up a less dangerous pastime?”

What an awesomely imaginative story. The kids displayed such enthusiasm and creativity in this workshop, and this story is testament to that.

Stories from WA, Part 1: Dean and the Zombies DVD Review — Doctor Who: The Ice Warriors