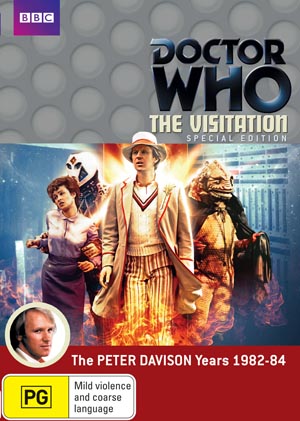 First screened in 1982 as part of the Season 19, “The Visitation” is the first story written by future script editor Eric Saward. Its positioning is interesting— a quasi-historical story right before the purely historical “Black Orchid”. It’s a reasonable script — not brilliant by any means, but definitely better than some of the other offerings from this season. It suffers a little from an over-abundance of companions. Not only do we have Adric, Nyssa and Tegan, but Saward gives us a ‘temporary companion’ in the form of travelling actor/highwayman Richard Mace (a character Saward had previously written for some radio plays and reused for this story). Mace ends up being far more interesting and engaging than the regular companions — partly due to Michael Robbins’s wonderfully theatrical performance (which is perfectly suited, as he is playing an actor). My biggest problem with the script is that the lead Terileptile suffers from Bond Villain Syndrome — instead of just killing the Doctor, he explains everything in great detail, then leaves the Doctor in a situation he can escape from.

This story is interesting for a number of reasons. It begins with a lengthy prologue that doesn’t feature any of the regular cast… and the people in that prologue all die. It’s an unusual, but very effective way of establishing the setting and opening the story. Davison’s performance as the fifth Doctor is a little more abrasive than what it would eventually become (although his fourth story, it was only the second to be recorded). And, of course, this story features the destruction of the sonic screwdriver, which would not reappear for many years to come.

In terms of production, it’s a mixed bag. All up, the direction is pedestrian. The design and model work is rather good. While the Terileptil masks are quite effective, with their animatronic movements, the costumes are obviously restrictive — as a result, the Terileptils’ movements are awkward and the action sequences are rather crap. The android is way too glittery and bejewelled (and yes, if you listen to the commentary and interviews, there is a reason for this, but it doesn’t come across in the actual story)… and it’s wearing cricket gloves.

Being a two-disc special edition, there are lots of extras. The commentary with Peter Davison (The Doctor), Janet Fielding (Tegan), Sarah Sutton (Nyssa), Matthew Waterhouse (Adric) and director Peter Moffatt is sparkling. The Davison commentaries tend to be my favourites, as he and his co-stars have a terrific chemistry and the ability to rib each other mercilessly. These people don’t need a moderator, as they seem to have no trouble finding things to talk about. Very entertaining!

There are behind-the-scenes docos and interviews aplenty, covering the writing, directing and music. My favourite is “Grim Tales” in which Peter Davison, Janet Fielding and Sarah Sutton revisit the locations of the story and reminisce. Again, as with the commentary, these three actors sparkle when they are thrown together. Lots of stories, fun and ribbing ensue. They poke a lot of fun at each other, their co-stars and the show in general — but it is always with a gentle affection.

All up, “The Visitation” is an entertaining romp and the special edition is an excellent release.

Doctor Who: The Visitation, Special Edition is released on DVD in Australia by Roadshow Entertainment.

AWARDS NEWS
Viewing Clutter has been shortlisted for a Chronos Award in the category of “Best Fan Publication”. All members of the Continuum convention are eligible to vote. Or you can purchase a voting membership for $5 if you feel so inclined. Voting closes on 20 May 2013. More info…
http://continuum.org.au/c9/chronos-awards/2012-chronos-award-nominees-and-ballot/

Anthologies — the new, the old and the foreign Book Week, Continuum and other gigs