Book Week, Continuum and other gigs 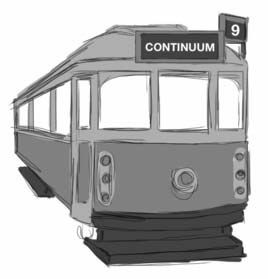 I’ve had a fairly quiet first half of the year in terms of speaking… which is a good thing, I suppose, given how many writing projects I’ve had on the go. But things are hotting up. I’ve had a string of bookings recently, with more on the way.

Three days during Book Week have already been taken, with talks at Mooroolbark College and Springvale Library, and a lecture for the “Encounters With Writing” subject at the University of Melbourne. So if anyone out there wants me for Book Week — there are only two weekdays left.

But things are kicking off this week, which is both Education Week and Library and Information Week. As part of Education Week, I’ll be visiting Gordon Street Pre-school to read some of my stories and talk about being an author. As part of Library and Information Week, I’ll be at the Craigieburn Library Literary Festival along with numerous other authors to run some writing workshops with local students.

Then there are a variety of other gigs coming up. As a Books in Homes Role Model, I’ll be visiting Hastings Westpark Primary School to talk about the importance of reading. Mentone Library, Write Away With Me Master Classes and a visit to Buln Buln are also on the cards. The upcoming release of Gamers’ Rebellion also means there will be promo gigs on the horizon as well.

But what am I looking forward to most at the moment? Continuum 9! Continuum is Melbourne’s annual spec fic and pop culture convention. If you’d like to find out a little about it, check out my Literary Clutter post. I’ll be doing a variety of things over the four days of Continuum 9 (7-10 June). I’ll be doing a reading, participating in a debate, launching my new novel, Gamers’ Rebellion, and hosting SFQI (a spec fic reinterpretation of Stephen Fry’s famous quiz show, QI). I’ll also be appearing on the following discussion panels:

One of the reasons I like going to Continuum (and there are many) is that I get to talk about Doctor Who as well as my writing. And Doctor Who is just the coolest thing ever! 😉 Want to come along? Check out the Continuum website for more info.

And if you want to book me for a speaking gig or a writing workshop, check out my speaking page and my list of upcoming gigs.