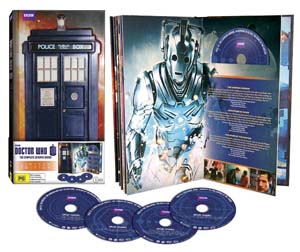 Series 7 of the new series of Doctor Who was a divided season, with the first half appearing on our screens in 2012, and the second half in 2013. So each batch of episodes got their own DVD/Blu-ray release. But now the whole season has been collected into a box set (along with “The Doctor, the Widow and the Wardrobe”), and as well as the standard release, there is a Limited Edition with fancy packaging.

The packaging looks awesome! It’s presented as a tall book, with sturdy thick cardboard pages into which the discs are slipped — a page of info and piccies for each of the five discs. The book sits in a thinner cardboard slipcase. It is a thing of beauty, with excellent layout, great photos and an embossed plastic TARDIS on the front cover. Where the packaging fails, is in its listing of the extras. They are not listed on the individual pages — only on the cardboard slipcase. And there’s not much info about them. At the very least, I would have liked a listing of people doing the commentaries.

In terms of extras, this set doesn’t really contain all that much more than the previous half-season releases. So, let’s take a look at the new extras. The short (2:30–4:30min each) behind-the-scene vids that were created about each episode for the BBC’s Doctor Who website are, well… short. Too short. The couple of longer behind-the-scenes docos (“The Last Days of the Ponds” and “Creating Clara”) are pedestrian. The webisode “She Said, He Said” is okay. Of the three new minisodes, “The Inforarium” is rather good, but the other two are a bit meh. Then there are the commentaries.

“The Snowmen” — commentary by production designer Michael Pickwoad and art director Paul Spriggs.
This is the worst of the commentaries. Although these guys seem to have some interesting info to impart, they are as dull as dishwater. As I write this review, I honestly can’t recall a single thing they said.

“Cold War” — commentary by writer Mark Gatiss, VFX supervisor Murray Barber, and VFX producer Jenna Powell.
This is the highlight commentary. Gatis is a long-time Who fan, and his comments about this episode, as well as about the Ice Warriors in general, are really interesting.

“Hide” — commentary by actor Matt Smith (The Doctor) and director Jamie Payne.
It’s an okay commentary, but nothing special.

“The Crimson Death” — commentary by actors Neve McIntosh (Vastra), Dan Starkey (Strax), and Catrin Stewart (Jenny).
Again, it’s an okay commentary, but nothing special. The three of them spend a little too much time watching the ep instead of talking about it.

All up, this release highlights how much better the classic Who DVD releases are. They consistently provide great extras (specifically made for the DVDs) and although the packaging is standard and simple, they always include lots of info about the extras.

In all honesty, if you already have the two half-season sets, don’t bother getting this one (unless you’re a completist mega-fan). There’s just not enough worthwhile additional material to justify the cost. On the other hand, if you don’t already own these episodes, then you might as well get this set and have those few extra bits and pieces.

As well as being released in this Limited Edition, Series 7 has also been released in a standard edition, sans fancy packaging but retaining the extras.

Doctor Who: The Complete Seventh Series is released in Australia on DVD and Blu-ray by Roadshow Entertainment.