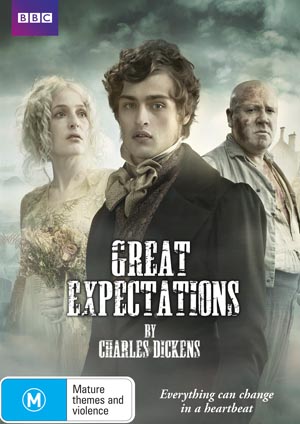 I get excited whenever the BBC announce a new costume drama — they are so damn good at that genre. Although some are better than others, I don’t think I’ve ever been disappointed in one. A new adaptation of Great Expectations is their latest on DVD… and it is, as you would expect, BRILLIANT!

It’s been a very long time since I’ve read the Dickens novel, and quite a while since I’ve watched another adaptation of this story — so I’ll be reviewing this version in isolation.

The story concerns an orphan boy named Pip, living with his sister and her blacksmith husband. The rich local reclusive spinster, Miss Havisham, arranges for him to visit regularly as company for her adopted daughter, Estella — but it turns out her motives are a touch more twisted. Pip’s family hope that riches will come their way because of Pip’s association with Miss Havisham. But it is Pip’s kindness to an escaped convict that eventually sees him raised from his circumstances, to make him a young man “of great expectations”. Of course, money isn’t everything, as Pip soon discovers; and despite his now higher place in society, he still finds himself caught up in a web of others’ machinations. It is a dark and twisted tail… and this adaptation revels in the gruesomeness — from the treatment of prisoners to the unexpected fiery demise of one of the characters.

Like all recent BBC costume dramas, it is lavish in every respect — costume, setting, direction. It is a joy to watch, simply for its period detail. The locations are particularly striking — from the bleakness of the landscape where Pip lives with his sister, to the grand decay of Miss Havisham’s mansion, to both the rich and poor areas of London.

From Douglas Booth’s likeable Pip to Ray Winston’s sympathetic convict, Magwitch, the cast is superb. But for me there are two standout performances. David Suchet, best known for his portrayal of Agatha Christie’s Hercule Poirot, gives a wonderful performance of contained intensity as the lawyer, Jaggers — just watch his many little mannerisms deteriorate as he’s put under pressure. But it is Gillian Anderson who steals the show as Miss Havisham. Anderson first came to prominence as Scully in The X-Files, but has since gone on to play a wide variety of roles. And this is not her first Dickens — she played Lady Deadlock in the BBC’s 2005 adaptation of Bleak House (see my review). Her performance is just the right mixture of madness, obsession and restraint. It is a character that could easily have been played over the top — but Anderson makes her believable and tragic and pitiable.

Great Expectations is a great watch! I loved it!

Unfortunately there are no extra features of any sort on this DVD release, which is a huge disappointment. I would love to have seen some behind-the-scenes stuff. I can only hope that a special edition will eventually be released.

Great Expectations will be released on DVD in Australia by Roadshow Entertainment in April 2012.

I love Doctor Who Notions Unlimited