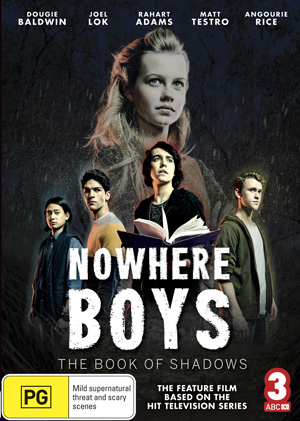 After two successful seasons of the television series (see review of Series 1 and Series 2), Nowhere Boys has transitioned to a feature-length film. The Book of Shadows had a limited cinematic release at the start of 2016, then screened on ABC3. And now it’s on DVD. While perhaps not as strong as the series, it is nevertheless entertaining and a fitting conclusion to the story begun in the series.

Since the events of season 2, the four boys — goth-boy Felix (Dougie Baldwin), nerdy Andy (Joel Lok), skater-boy Sam (Rahart Adams) and Jake the jock (Matt Testro) — have pretty much gone their separate ways, each preoccupied with their own pursuits. Only Felix wants to persist with magic. Discovering a sealed Book of Shadows, he inadvertently releases a force of chaos in his endeavours to discover its secrets. The four boys must now reunite to set things right.

While the film tries valiantly to fill the viewers in on the past events of the series, it’s not really for stand-alone viewing. There is perhaps a little too much ‘previously on’ exposition for fans, although the use of animation in telling the story so far is very stylish; but I can’t really see the film attracting casual viewers either.

The pace of the film doesn’t flow as well as the series and character motivations seem at times a little forced. Having said that, it is still a fun and entertaining watch – maintaining the mix of action, adventure and humour from the series. And it does tie together various plot elements of the series. The creator of the hidden room that’s discovered during season 2 is revealed. And the story of those in negative space is concluded. Although it’s the actions of Felix and the other boys that propel the story forward, everything really centres around Bear and his origins — Bear is the guardian of negative space and the source of the restoring demons.

I’ve said it in past reviews, but I’ll say it again – the four leads are exceptionally well cast. Likeable and believable individually, they also have a great chemistry together. Many of the supporting cast are back, all continuing to do a great job. The film also adds Angourie Rice into the mix, as the mysterious new girl Tegan. She’s reasonably good, but not as convincing as the others.

The film is technically more ambitious than the series, with lots of sweeping drone shots. Despite this, it still has a very TV air about it – not really feeling like a feature film.

The Book of Shadows wraps things up nicely for the current cast, and opens the door to further adventures for other potential nowhere boys (and girls). In fact, season 3 of the series is on the way, and a new cast of characters has been announced. I’m looking forward to it.

The DVD release is good but unremarkable. One disc, standard packaging and some a short behind-the-scenes featurettes.

Nowhere Boys: The Book of Shadows is released in Australia on DVD by Roadshow Entertainment.

A world of possibilities 100 Books!