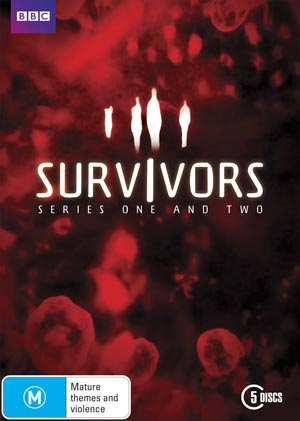 A new strain of influenza sweeps across the world and wipes out the vast majority of human beings. This BBC series follows the adventures of a small group of survivors — hence the title: Survivors. There’s nothing new about this concept, but this series, despite some problematic details, handles it all rather well.

Survivors has an interesting history. It started off as a series in the 1970s, created by Terry Nation (the man who introduced Daleks to Doctor Who), which ran for three seasons. Nation then wrote a novel based on the series. And then in 2008 Adrian Hodges (co-creator of Primeval — see my review) created a new series based on this novel, rather than on the original series. I’ve not seen the original series, nor have I read the novel, so I’m approaching this new series completely on its own merits.

There is something endlessly fascinating with the concept of how survivors will deal with being the last remaining humans after some sort of disaster wipes out the majority of the world’s population. Be it a nuclear war, an alien invasion or, in this case, a virus — we are interested in seeing how people will cope. Will it bring out the best in people, or the worst? Will people band together and start again, or will they take the opportunity to look out for number one? These are the sorts of questions that Survivors examines.

This series focuses on a small group of survivors in England, and their encounters with others — including a commune controlled by the last remaining politician, a former university professor using slave labour to operate a coal mine, a group of thugs jealously guarding their territory, and a group of adolescents who have taken over a mansion. Increasingly prominent as the series progresses is a disease research centre which had prior knowledge of the pandemic, and the mysterious group of people they report to. They are desperately conducting unethical experiments on survivors in the hope of creating a vaccine. They are particularly keen to get their hands on one of our intrepid survivors, Abby Grant. Rather than simply being immune like all the other survivors, she is the only person to have contracted the virus and successfully recovered.

The real strong point of this series is the characterisation. We are given a varied group of people, with very different motivations, who are thrust together, not always happily. Perhaps the most interesting and complex of these characters is Tom Price, who is in prison for theft and murder when the virus hits. He is brutal; he is a killer; but he joins the group and does his best to protect them. I couldn’t help but like him.

Where the series stumbles, is in the details. The surviving people do not look like they are the last vestiges of the human race. They still somehow maintain their lovely hairstyles. The men (even the slave labour force in the mine) manage to find time to shave. When the virus is at its worst in the first episode, the city streets are clogged with traffic as people try to get away, but die in their cars. Later in the same episode, and for the rest of the series, the street are all deserted, making it look like everyone disappeared rather than died. I often found this poor attention to detail taking me out of the moment.

The series was cancelled after the second season. Thankfully we do get at least some closure. Most of the ongoing plotlines are wrapped up… with the exception of the mysterious people who controlled the research centre. The final episode, which unfortunately has quite a few problematic moments in terms of details and motivations, does finish things off in an exciting way — but it also opens things up for a new direction, obviously expecting (hoping) for a further season that never came. It’s a great pity, as the new direction held a lot of potential.

All up this is an entertaining and thought-provoking series. If you can ignore the problematic details and get caught up in the lives of the wonderful characters, then it’s well worth a watch.

This box set is presented in two standard plastic DVD cases held within an outer cardboard slipcase. It looks good, but lacks a list of episodes. There are some nice featurettes on the first series discs, looking at the special effects, characters and the making of the show. There’s also a hidden extra on the first disc, with more behind-the-scenes stuff. Unfortunately there are no extras for the second series.

Survivors is released on DVD in Australia by Roadshow Entertainment.