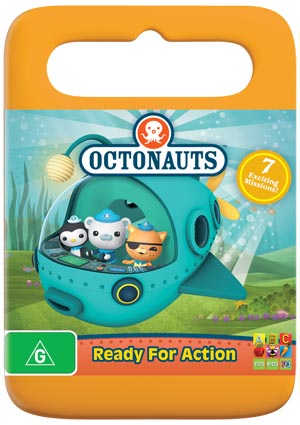 The Octonauts is an animated kids’ series based on a set of four picture books (see my review over at Literary Clutter). This DVD release, The Octonauts: Ready For Action, contains seven of the 52 episodes that were made in 2010/2011. The series has being quite a hit and seems to be popular with a large age-range of kids. Take a look in your local ABC store and you’ll see lots of merchandise quickly disappearing off the shelves.

The series is about a group of anthropomorphised animals who wander the Earth’s oceans in the Octopod (their mobile, octopus-like base of operations), exploring, rescuing sea creatures and protecting the environment. Their catchcry is: “Explore! Rescue! Protect!”

The team is lead by Captain Barnacles (a polar bear) and include: Kwazii, a kitten with a piratical past; Peso, a penguin who is the group’s medic; Dashi the dachshund, photographer and computer expert; the group’s scientist, Dr. Shellington, a sea otter; Tweak the engineer, who’s a bunny; and Professor Inkling the brilliant octopus oceanographer and founder of the Octonauts. Oh, and there are a bunch of rather curious creatures called Vegimals, led by Tunip. They are part animal, part vegetable, and they seem to do the catering aboard the Octopod.

Each episode focuses on a particular sea creature and we get to learn a little bit about it… I particularly like the episode about the Snot Sea Cucumber. I was laughing out loud at the snot jokes. An environmental theme runs through the series, as well as a gentle humour and fun approach. The seven eps on this release are a good representation of the series as a whole. The episodes are: “The Giant Kelp Forest”, “The Enemy Anemones”, “The Narwhal”, “The Midnight Zone”, “The Snapping Shrimp”, “The Snot Sea Cucumber” and “The Giant Whirlpool”.

Although I quite like the books on which the series is based, I actually prefer the series. One of the strengths of it is the voice characterisation, with each of the Octonaut crew members given a different nationality and corresponding accent.

As well as the seven episodes, this release features an additional “Creature Report” for each of the sea creatures we encounter — a cute little musical tribute to each creature and its characteristics.

All up, this series and this release are a lot of fun. It’s a quality programme for younger kids that I also found quite enjoyable as an adult.

The Octonauts is released on DVD in Australia by Roadshow Entertainment.

DVD Review — Survivors: Series One and Two I love Doctor Who