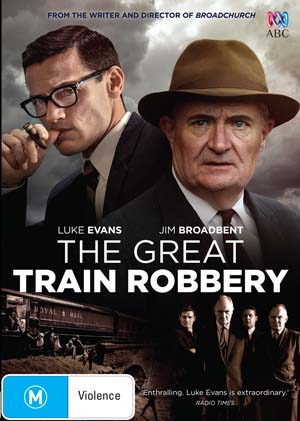 The Great Train Robbery is a new BBC mini-series about the biggest train robbery in British history. The names most often associated with the infamous robbery are Ronnie Biggs and Buster Edwards, but this version focuses on the organiser Bruce Reynolds and the investigating officer Tommy Butler.

In 1963 a bunch of mid-level thieves got together to plan the robbery of a Royal Mail train. The train was carrying over two million pounds in notes from various banks around the country aboard a HVP (High Value Packages) coach. The robbery was a success. What followed, was Britain’s biggest post-war police investigation.

This new telling does something a little different, splitting the story over a two-part mini-series, with each ep running feature length. It’s like watching two separate, but linked, films. The approach and style for each is quite different.

The first episode, “A Robber’s Tale”, tells the story of the planning, the robbery itself and the getaway. It’s from the point of view of the thieves, primarily the organiser Bruce Reynolds (played by Luke Evans). Suspense, action and wit combine into a rather stylish heist film. A film that’s also about friendship, cooperation and (sometimes misplaced) reliance on others.

Part two, “A Copper’s Tale”, switches POV to the police as we get the story of the investigation. It’s told primarily through the eyes of DCS Tommy Butler, beautifully played by Academy Award-winning actor Jim Broadbent. It’s a tale of obsession and dogged investigation… and loneliness. And with the POV switch, so too the audience allegiance changes. Where I was mostly wanting the thieves to get away with it in part one, I now found myself wanting them to get caught.

The Great Train Robbery is written by Chris Chibnall, who penned the brilliant Broadchurch (see review), as well as a number of Doctor Who eps. There is some wonderful dialogue, particular the final café scene between Butler and Reynolds, where unforseen consequences are discussed. Consequences of the crime…

“You’ve been doing this long enough. Every crime has a victim somewhere. You haven’t ever given them a thought.”

Consequences of the punishment…

“You know what sending everyone down for 30 years does? It means every little crook takes weapons now — guns on every job. ‘Cause if you’re going to get 30 years without a gun, you might as well take one. Can’t be any worse. The moment that judge did that, everything changed… whole attitude. The moment he passed that sentence, he brought guns into every job.”

It’s this scene that left me doubting my viewing allegiances… not really knowing if my loyalties lay with either side.

This is an excellent production. Well worth watching. Unfortunately the DVD release is rather uninspiring, with ZERO extra features.

The Great Train Robbery is released on DVD in Australia by Roadshow Entertainment.

YOU CHOOSE in 2015 Blu-ray Review — Doctor Who: The Complete Eighth Series