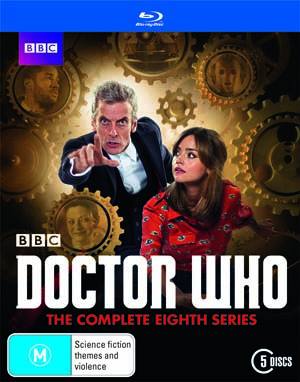 The eighth series of the revived Doctor Who burst onto our screens with renewed vigour earlier this year. A new Doctor and a new direction catapults this set of 12 episodes to new heights. And now it’s out on DVD and Blu-ray to enjoy all over again… and again… and again… and…

Clara: Where are we going?
Doctor: Into darkness.

The Doctor regenerated at the end of the 2013 Christmas special, “The Time of the Doctor” (see review), from Matt Smith into Peter Capaldi. An older actor (Capaldi is 56), he gives the role a great deal of gravitas, emphasising the Doctor’s alienness, irascibility and preoccupation with this own agenda.

While I enjoyed the Matt Smith era (and that actor’s performance), I found that, as a whole, it was too frenetic and fairytale-ish; emphasising cool ideas over internal logic, and style over substance. But the new Doctor seems to have ushered in a new look and feel for the show; a change of thematic direction. The pacing has slowed down, the writing has become more thoughtful and the overall feel is darker. Even the music has been toned down a notch, becoming subtler, adding to the scenes rather than competing with them, as was becoming the case.

As a companion, Clara has really grown in this season. Starting out as a mere plot device without any real substance, she has now been given some depth and character. The interaction between her and Capaldi’s Doctor is electric. She works so much better with him than with his predecessor.

“Am I a good man?” the Doctor asks Clara early on in the season. And this becomes the overarching theme — what kind of man is he? And what does it take to be the Doctor? Something that Clara gets to experience first-hand.

“You were an exceptional Doctor, Clara. But goodness had nothing to do with it.”

It’s very much a character season. The new Doctor develops and finds out who he is. Clara discovers how travelling with the Doctor can impact on her everyday life and that there is an emotional price to be paid. We also meet Danny Pink, Clara’s new boyfriend — and this season is also about him; about how Clara’s life with the Doctor impacts on him.

Now, let’s look at the episodes…

“Deep Breath”
A perfect start, it sets the tone, pacing and characterisation that is to follow. (see my review of the individual release)

“Into the Dalek”
An excellent episode. The Daleks are, at long last, a force to be reckoned with. And this story takes a different approach with them. Yes, it’s derivative of Fantastic Voyage, but it uses the concept so wonderfully and to great effect. There is some great dialogue showing how callous the new Doctor can be, and how his aim is to save as many people as he can without the need for a good bedside manner.

“Robot of Sherwood”
A light and fluffy, but thoroughly entertaining episode. Ben Miller gives a standout performance as the Sheriff of Nottingham and there is some wonderful dialogue about the importance of legends. The only real disappointment is the rather naff climax involving a golden arrow.

“Listen”
For me, this is the highlight of the season. It’s a small-scale story; a personal story; a story about dealing with and exploring one’s own fears. There is no actual monster. No evil force. The universe in not in danger. This is a story about characters and their interactions. Perhaps most importantly, this is a story about what makes the Doctor tick. This story also moves Danny Pink’s arc forward, and creates another bond between the Doctor and Clara (perhaps an even greater one that the splintered-through-time encounters of the previous season). This is Moffat at his very best as a writer.

“Time Heist”
A fun, stylish episode that riffs off of numerous heist films and even the Hustle TV series. It includes a wonderful dual performance from Keeley Hawes.

“The Caretaker”
A slightly disappointing ep. It’s not bad. It’s just that it’s not great either and suffers from comparison in such a strong season. The episode lacks subtly, overplaying the father/daughter analogy, and is rather oddly paced.

“Kill the Moon”
The closest thing you get to a dud episode this season. It centres around a cool enough fantasy concept (the moon is an egg), but one that just seems completely and utterly out of place in the Doctor Who universe. The episode also suffers for trying to fit in too much, resulting in things being dropped as the episode progresses. I feel it would have been better off concentrating on the spider creatures. Having said all this, it still has a lot of good moments.

“Mummy on the Orient Express”
And we’re back to brilliance. This episode works so well, taking a classic horror motif (the mummy), putting it in an unexpected location (an Orient Express replica in space) and giving it all a science fiction context. And the whole thing is pulled together with an unexpected but poignant ending.

“Flatline”
The season continues to go from strength to strength with this one. Great concept. Well executed. It includes some of the best CGI effects the series has come up with, in an innovative way. And although the solution is perhaps a little too easily achieved, the journey there was wonderful.

“In the Forest of the Night”
This is a very fairtale-ish episode, that perhaps would have better suited the Matt Smith era. It’s not the strongest ep of the season, with some plot holes big enough to drive a spaceship through. But for what it is, a bit of an environmental statement, it works well enough.

“Dark Water”
Absolutely brilliant set-up episode. The building of tension is excellent. The Cybermen are scary — they work so well as zombies, which, in essence, is what these ones are. And Missy is the best villain we’ve had in ages. The big reveal that she is actually a gender-swapped Master is gold! Michelle Gomez is so good in the role, bringing just the right amount of playfulness to the insanity.

“Death in Heaven”
This final ep doesn’t quite live up to the promise of the penultimate… but is still pretty damn good. Certainly the best season finale in a long time. I wasn’t thrilled with the concept of cyber-pollen, or the cheesy cyber-Brig. But I loved Missy’s raison d’être for the whole elaborate scheme. It adds another layer to her/his relationship with the Doctor. Her evil insanity is spot on…  “Have you got any more friends I can play with?” she asks, after casually killing a character we’ve really come to like and care about (a character, I might add, that Moffat has misled us into thinking might be the next companion). And the end bit, with all the lying and hugging, was perfect.

A very strong season indeed! It’s left me wanting more. I am now counting the days until the screening of the Christmas special.

This set comes with a whole batch of extra features, including lots of behind the scenes stuff and interviews. All the making-of, web-based episodes of Doctor Who Extra. There’s a great doco about the Doctor Who World Tour. One of my favs is the music video for the Foxes song that appeared briefly in “Mummy on the Orient Express”. And there are commentaries (let me hear a big YAY for commentaries)…

“Into the Dalek”
Phil Ford — co-writer
Ben Wheatley — director
These two guys obviously get along like a house on fire. They are having a ball doing this commentary and their enthusiasm is infectious. And they are both such fanboys, the true extent of which is revealed through their Abslom Daak discussion. Definitely the best of the commentaries!

“Robot of Sherwood”
Paul Murphy — director
It’s an informative commentary, but rather uninspired. A good case-in-point for having multiple people on a commentary track.

“The Caretaker”
Paul Murphy — director
Peter Hawkins — animatronic designer
Kate Walshe — prosthetics designer
Murphy does so much better with this commentary because he’s got other people to interact with. While by no means brilliant, it is informative and engaging.

All up, this is an excellent release. I could go on and on about this season, but you’ve probably had enough of my ranting as it is. So, let me finish up by saying… Highly recommended for fans! But also a good set for less-obsessed casual viewers, simply because it’s such a strong batch of eps.

Doctor Who: The Complete Eighth Series is released on DVD and Blu-ray in Australia by Roadshow Entertainment.