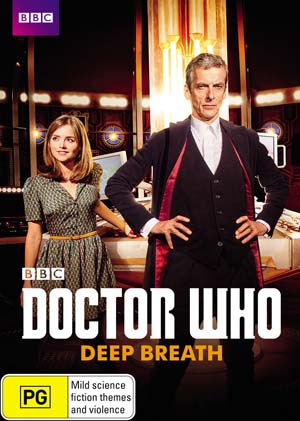 Deep Breath. The first episode of Doctor Who: Series 8. An extra-long ep. New Doctor. New direction. Very exciting! A much-anticipated episode, it even got a cinema release, so it’s no surprise that it gets its own DVD/Blu-ray release independent of the rest of the season.

The Doctor regenerated at the end of the 2013 Christmas Special “The Time of the Doctor” (see review), with actor Matt Smith replaced by Peter Capaldi. Capaldi only got one very short scene at the end of that special, so this is the episode in which we, and his companion Clara, get to know him.

The Doctor and Clara arrive in Victorian London with a dinosaur accidentally in tow. With his regeneration cycle reset by the Time Lords, the Doctor is suffering some post-regenerative trauma, behaving erratically and passing out. But the Paternoster Gang is there to help. While everyone is worrying about the dinosaur, there are other far more troubling things happening. In a slight case of déjà vu, the Doctor finds himself pitted against some spaceship repair droids that are harvesting organs. On a more personal level, the Doctor needs to work out what sort of man he is, and Clara needs to find out if she still knows him.

This episode is very different to the last few seasons. In fact, the new title sequence and rearranged theme seem to usher in a deliberate break from the style of the Matt Smith era. Gone are the fairytale quality and break-neck speed. In their place are a darker feel and a more even pacing. This introductory episode feels a bit more like a classic series story than recent nuWho. There is nothing Earth-shatteringly brilliant about the plot, but it is a good solid story. It is the pacing and feel of the episode, along with Capaldi’s performance that makes “Deep Breath” so compelling.

The pacing is excellent, providing time for some character development and unfolding of story. The dialogue-driven story approach even allows for some lengthy conversations. Wonderful stuff!

Peter Capaldi takes the role of the Doctor and makes it his own from his first moment on screen. This is an edgier Doctor; a darker character; someone that even his companion is not entirely certain of yet. He is alien and mysterious. And he is forthright in his intentions to put a stop to any romantic overtones with Clara. This all results in some awesome dialogue, with the confrontation between the Doctor and the almost human, head cyborg (a masterfully chilling performance from Peter Ferdinando) being the highlight.

I’ve got the horrible feeling I’m going to have to kill you. I thought you might appreciate a drink first. I know I would.

The Doctor starts things off with these words. In the end, we never find out if the cyborg jumped to his death, or if he was pushed by the Doctor. Mystery and darkness wrapped up in one little piece of unrevealed information.

The relationship between the Doctor and Clara is well handled. Clara’s uncertainly of him, intensified by the loss of her Doctor, is a good parallel for what some viewers would undoubtedly have been feeling. Again, this leads to some wonderful dialogue. The appearance of #11, via a phone call, during the climactic encounter between them is a highlight, as we get to see just how much the new Doctor needs Clara.

I’m not on the phone, I’m right here. Standing in front of you. Please just see me.

Clara seems to work so much better with this new Doctor. Starting out as a plot device rather than a character, it became quickly obvious that there was no substance to Clara after her great ‘impossible girl’ mystery had been solved. But alongside Capildi she seems to have found a voice, a purpose and, dare I say it, some depth.

The Paternoster Gang are in fine form, although Strax as comic relief has been a touch over-used. Madam Vastra gets some nice moments, as done Jenny. This trio of characters are much loved by one side of fandom and much hated by the other side, and I don’t think this episode will change any opinions.

After all the events of the episode proper, we are given a little tagged on scene to introduce this year’s story-arc. I just hope this one makes sense and doesn’t stretch out too long.

Were I to be nitpicky, the only negative for me was the way in which the Victorian Londoners seem to take all manner of things in their stride. Lizard woman and potato-headed man wandering the streets? No problem. Dinosaur splashing about in the Thames? Just another day. If you can get past this, “Deep Breath” is a gem — an excellent introduction for the new Doctor, a great episode in its own right and, hopefully, a wonderful indication of things to come.

There are a few extra features included on the disc. The intro from the cinema screenings is hilarious. Probably the best of the Strax vlogs to date. The behind the scenes featurette is interesting, but too short. And finally we have the live television broadcast that announced Capaldi as the new Doctor.

This is a great release for casual viewers who just want Capaldi’s first ep, or obsessive fans (raise your hands if you want to join me here) who can’t wait for the season box set. But everyone else is better off waiting for the season release which will package this episode up with all the others and, hopefully, more extras.

Doctor Who: Deep Breath is released in Australia on DVD and Blu-ray by Roadshow Entertainment.

The best Thank You DVD Review — Wizards vs Aliens: Series 2