Blu-ray Review — Doctor Who: The Time of the Doctor 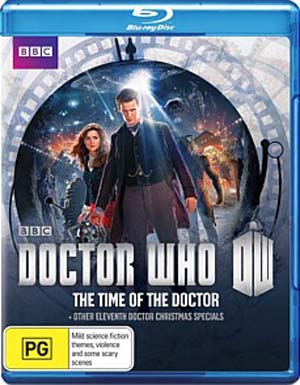 The 2013 Doctor Who Christmas Special “The Time of the Doctor”, certainly seems to have divided opinion. While many vocal fans have proclaimed it the best thing since sliced bread, other even more vocal viewers have declared it to be the worst episode ever. The opinion of this review falls somewhere in the middle.

On a distant planet there is a town called Christmas. In this town, no one can lie. In this town is a crack in the fabric of reality (you remember, like the ones that kept appearing during Series 5). Through the crack a coded message is being transmitted for all the universe to hear. Above the planet, a plethora of alien races have gathered, itching for a fight. But the planet has been shielded by the Church of the Papal Mainframe. Into all of this enters the Doctor. With a decapitated Cyberman’s head, he decodes the message — “Doctor Who?” A question sent by the Time Lords (remember… they were packed off to another universe in “The Day of the Doctor”) in anticipation of their return. But all those gathered aliens would rather see the planet destroyed than the Time Lords return… so the Doctor sticks around (for a VERY long time) to defend the planet and the town.

This story tries really hard to bring together and tie up all the loose ends from the Matt Smith era. It is a valiant effort, but the nonsensical plot lines (River Song as the impossible astronaut, etc) still don’t make sense… but at least they’re now gone. The Capaldi era gets to start with a clean slate.

Relationships are a key element of this story. The relationship that develops between the Doctor and the Cyberman head, who he affectionately names Handles, is so well done. I was genuinely surprised to find myself caring about a metal head. The Doctor’s relationship with Barnable is a minor part of the story but also rather well handled, highlighting his need for a companion. Then there’s Tasha Lem, Mother Superious of the Papal Mainframe, who has a past with the Doctor. The relationship that just doesn’t work all that well for me is the Doctor and Clara. It seems that there is little to Clara as a character now that her mystery has been solved.

There are lots of cute moments — the reference to “The Five Doctors”, the truth field (love the scene with the husband and wife); The Silence as confessors (confess and forget… what a fab combo); the concept of the Papal Mainframe (“Keeping you safe in this world and the next.”); and the Doctor shouting at the Daleks:

“You’ve been trying to kill me for centuries, and here I am, dying of old age. If you want something done, do it yourself.”

But there are so many daft bits too — the Weeping Angles just going away after their one scene (Look… I loved them in “Blink”, but they really should have been left with that story. It seems that every time they appear, their credibility is diluted.); the translation of the Time Lords’ message being available to EVERYONE; the laboured naked jokes; and the explosive regeneration reset. Speaking of regeneration…

“Time of the Doctor” is, of course, Matt Smith’s final story. His regeneration story. But with a twist, because he has no more regenerations. He’s used them all up (Yes, he’s only #11 and there are meant to be 13… but we’re counting the War Doctor and Tennant’s quasi-regen). So his regeneration cycle needs to be reset (something already established as a possibility in classic Who) before he can turn into Peter Capaldi. Of course, he doesn’t know he’s going to get this new set of regenerations, so he thinks he’s actually going to die. That was nicely done.

Unfortunately the reset process is rather STUPID! An explosive reset with regeneration energy that destroys an entire Dalek spaceship. Really? I’m sorry, but this stretched credibility to breaking point.

Mind you, the actual regeneration is brilliant. The fact that the Doctor ages to death while protecting Christmas is wonderful. Most of the Doctors have had to regenerate because their lives have been cut short, so it’s nice to have a Doctor reach the end of his body’s natural lifespan before regenerating. Smith’s farewell scene is perfect — from the image of Amy (the first person this version of the Doctor saw) to his goodbye speech…

“Times change and so must I. We all change when you think about it. We’re all different people all through our lives. And that’s ok, that’s good, as long as you keep moving, as long as you remember all the people that you used to be. I will not forget one line of this, not one day, I swear. I will always remember when The Doctor was me.”

It’s a heck of a performance from Matt Smith. A great way to exit the role.

And then there’s Peter Capaldi. It’s a perfect entrance and a tantalising taste of things to come. So, in the end, “The Time of the Doctor” leaves things on a high — full of expectations and hopes. Roll on Series 8!

Both the Blu-ray and DVD releases also include the other Smith era Christmas Specials, a nice little behind-the-scenes featurette and a doco called “Tales from the TARDIS” (which seems to be a rehash of interviews from “The Doctors Revisited”).

Doctor Who: The Time of the Doctor is released on DVD and Blu-ray in Australia by Roadshow Entertainment.