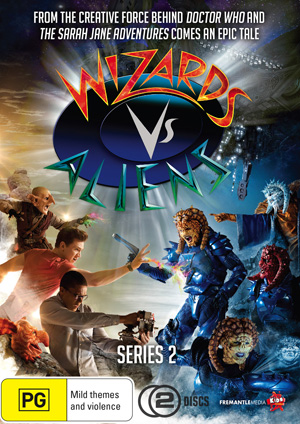 There are wizards on Earth, living secretly amongst the ordinary human beings. And there are aliens from the planet Nekross, who eat magic. These aliens have come to Earth, determined to extract the magic out of every last wizard. The wizards aren’t about to take this lying down. Result — Wizards vs Aliens. And this fun kids programme is back for a second season, building on what was established in the first and taking things in a few new directions.

Tom (Scott Haran) is a young wizard living with his mortal, widowed father (Michael Higgs) and his magical grandmother (Annette Badland) and her hob-goblin (Dan Starkey, best know for playing Strax in Doctor Who). His best friend is a science nerd named Benny (Percelle Ascott). Together, they battle against the schemes of the Nekross king (voiced by Brian Blessed) and his children Varg (Jefferson Hall) and Lexi (Gwendoline Christie).

This season builds on the last (see review of Series 1), following through on some of the character development. There are a lot of good things about this season, but the best is without a doubt Gwendoline Christie. She has achieved notoriety through her role of Brienne of Tarth in Game of Thrones, but she also shines in this series. Her performance behind heavy make-up as the alien Lexi is a stand-out, but she also gets to come out from behind that makeup in some eps.

Now, let’s look at the individual stories. Each is two parts, making a total of 14 half-hour episodes (two more than last season).

“100 Wizards” is a fairly standard opener, with the Nekross putting a new plan into action. Jefferson Hall gets to briefly come out from under his alien makeup, but unlike Christie in the previous season, the writers don’t give him any complexity… he’s just Varg without the makeup.

“Vice Versa” is a fairly ordinary body-swap story that introduces an annoying new puppet creature called a Hobbledeyhoy, that speaks in rhymes.

“The Cave of Menla-Gto” is an interesting one about magical experimentation gone wrong and the dire consequences.

“The Curse of Crowe” is an okay story about a spell turning Tom and Benny into enemies.

“The Thirteenth Floor” is the season highlight! Lexi is a human again… but this time actually a human as opposed to simply being in disguise. This story taps into the connection between her and Tom from the previous season, and takes it to a lovely conclusion, as the two of them live a life that could have been, in a magical world called the Nether-side. Wonderful character development, believable emotion and some brilliant performances — Christie shines as Lexi, but Scott Haran also gets to show how good an actor he is, particularly as he ages (he makes a surprisingly convincing 30-something).

In “Endless Night” the consequences of the previous story are played out. Again, there is some excellent character development.

“All Out War!” is quite an epic story of revolution and revelation. It’s the culmination of the story arc in which the plans of Technical Jathro (a minor character from last season, played by Tom Bell) and a new character named Chancellor Kooth (Victoria Wicks) are finally revealed.

Written by Russel T Davies, it is a fine episode despite its use of the Bad Wolf solution (Doctor Who fans will spot this from a mile away), which actually works rather well if you can overlook that fact that RTD is recycling his own stories. This story changes the dynamics of things, with the potential for new directions in Series 3.

On the down-side, we do get the old SF cliché of a character being killed off, only to be resurrected. [insert groan] Much as I like her character and sad though her death was, I would have liked her to stay dead. It could have led to interesting stories in the next series.

On the plus side… it was good to see Jathro develop as a character. And the highlight was Benny’s coming out. It was particularly well handled, with a conversation that was direct but also nicely understated.

Benny: “Equal and opposite, Tom. I’ll go on a date one day, just not with her. And not with a girl.”
Tom: “Oh. Right. You’re really the opposite of me. Benny, that’s brilliant.”
Benny: “It’s not brilliant. It just is.”

Series 3 has already been confirmed. I look forward to it.

The two-disc release is basic. No extras. Disappointing.

Wizards vs Aliens: Series 2 is released on DVD in Australia by Roadshow Entertainment.