DVD Review — Doctor Who: The Web of Fear 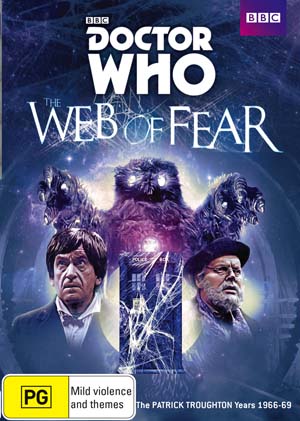 Lost for many years, most of the classic Doctor Who story “The Web of Fear” was returned to the BBC archive last year, along with “The Enemy of the World” (see my review). And now, with the still-missing episode reconstructed, it has been released on DVD. But does it live up to expectations?

“The Web of Fear” is a six-part story from Season 5 in 1968. A sequel to “The Abominable Snowmen” from three stories previous, it features the return of the Great Intelligence (which visited the Whoniverse more recently in the 2012 Christmas Special and subsequent episodes) and its robotic servants, the Yeti.

The TARDIS is trapped by a web-like substance while in transit and brought to the London Underground in 1968. The Doctor, Jamie and Victoria discover that London has been abandoned as the Great Intelligence and its Yeti have taken over the Underground. The military are fighting back with the assistance of Prof Travers (who we last met in Tibet during “The Abominable Snowmen”) and his daughter. But this time the Intelligence is after more than just a simple invasion — it also wants to drain the Doctor’s mind.

I’ll admit to a rather strong bias with this story. “The Abominable Snowmen” and “The Web of Fear” were two of my favourite and most read Doctor Who novelisations as a kid. So to finally see one of these stories in its original televised format was a magical experience. So despite its problems, I absolutely loved it!

“The Web of Fear” is yet another base-under-siege story as was so common in the Troughton era. At six episodes it is a little long and feels slightly padded by lots of aimless wandering about the tunnels of the London Underground. And I’m not sure that beginning an invasion of the Earth by taking over the London Underground is all that sound a tactic… but it makes for an interesting and atmospheric story. The incongruity of Yeti lumbering about the tunnels results in some striking visuals. The scenes of the TARDIS being captured are also pretty terrific.

The strong point of this story for me is the characterisation and casting. It introduces Colonel Lethbridge-Stewart (who would later return as a Brigadier to head U.N.I.T.)… but in a way to make you suspicious of him. You see, there’s a traitor amongst the good-guys, and the story does really well at shifting suspicion from one person to the next — always keeping the viewer guessing. Prof Travers, played by Jack Watling (father of Deborah Watling , who plays Victoria) is great most of the time — although somewhat clichéd and unconvincing when taken over by the Great Intelligence.

The stand-out character is Anne Travers, played by Tina Packer. During a time when woman on television were mostly playing second-fiddle to men, Anne Travers is a wonderfully strong, brave, independent, intelligent and well-rounded character who is integral to the story. She’s a scientist and has been engaged by the military to help in a situation that they find themselves rather lost in. And she’s got some wonderfully snappy dialogue that directly references the way in which women are portrayed. When a soldier tries to flirt with her by asking “What’s a girl like you doing in a job like this?”, she responds as if talking to a small child…

“Well, when I was a little girl I thought I’d like to be a scientist, so I became a scientist.”

The direction is suspenseful and atmospheric, while the production design and effects are a cut above standard. The Underground sets in particular are brilliant and the Yeti’s web-guns are eerily effective. The Yeti themselves appear a little cumbersome and are perhaps not quite as threatening as they should be… but they’re still rather good costumes.

Episode Three, unfortunately, was not recovered. So this DVD gives us a reconstruction using the soundtrack (which still exists in its entirety) and photos from the episode. It’s adequate, but lots of detail is lost. I would have much preferred an animated replacement as has been done with other missing episodes (such as the recent release of “The Moonbase”). This is just one indication of a rather rushed release — the same problem as with the release of “The Enemy of the World”. The other indication being the complete lack of extras — not even a commentary. Very disappointing!

All up, I found this story an absolute joy to watch. I’m not sure it would be all that great for casual viewers, but for long-time fans, it’s a must-own DVD.

Doctor Who: The Web of Fear is released on DVD in Australia by Roadshow Entertainment.

DVD Review — Doctor Who: The Moonbase Fairytale readers and other ed stuff