DVD Review — Doctor Who: The Moonbase 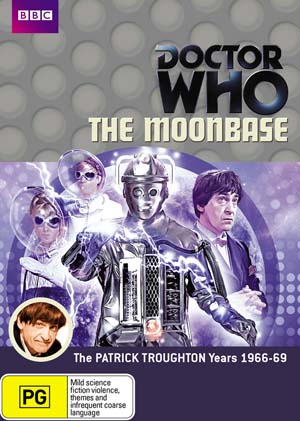 The return of the Cybermen! After their debut in “The Tenth Planet” (see review) the previous year, they were quick to return with the newly instated second Doctor in this 1967 Season Four adventure. A new look and a new plan ensured that this bunch of threatening aliens would come to achieve iconic status. Animation is used to replace the two missing episodes so that this classic story can finally be released on DVD.

The Doctor, Ben, Polly and the newest TARDIS crew member Jamie, land on the Moon in 2070, where a weather control base is desperately trying to deal with a mysterious plague. It’s not long before the Cybermen are revealed as being behind the illness as they attempt to take over the station and its weather-controlling Gravitron. Their intention is to disrupt the Earth’s weather and destroy all life there. Of course, the Doctor and his companions thwart the nasty metal men and save the Earth.

This four-part story is very much in the base-under-siege format that was par for the course during the Troughton era. The plot itself is reasonable, although some of the set-up lacks logic. The weather station, for instance, controls all of Earth’s weather… without any sort of backup! There is a nice build up of tension over the course of the first couple of episodes, as the Cybermen are revealed to the viewer but not the Doctor and the Moonbase personnel. The animated replacement eps are good, replicating the look and feel of the live-action quite successfully.

The Cybermen are in fine form. Their redesign, while loosing the creepy human-ish qualities of the previous version, results in a sleeker and slicker look. The Cybermen voices are now very electronic in sound, rather than the weird sing-song ones of “The Tenth Planet”. They are effectively chilling but sometimes difficult to understand. Although these Cybermen remain emotionless (unlike future incarnations) they are prone to the odd bit of daft dialogue…

“Only stupid Earth brains like yours would have been fooled.”

In this story they can be killed by solvents, sprayed into their chest units. And they’re not too fond of gravity. But they do look impressive… and their march across the surface of the Moon is certainly an iconic Doctor Who moment.

For the most part, the guest cast are unremarkable. Frazer Hines as Jamie doesn’t get to do all that much as he’s unconscious for much of the story. I’m not a fan of companions Ben and Polly, but Anneke Wills does get some good moments as Polly in this story, with the opportunity to demonstrate intelligence and bravery. Patrick Troughton is excellent, showing a more serious and determined version of his Doctor.

“There are some corners of the universe which have bred the most terrible things. Things that act against everything we believe in. They must be fought.”

The set design is good, with a large main Moonbase set that includes the Gravitron. The model of the Moonbase is okay but the Cybership is crap. The costumes are also a mixed bag. The Cybermen are brilliant but the Moonbase uniforms are rather ordinary (except for the French guy, who gets to wear a neck-tie). And the radiation caps are hilariously stupid. Some of the direction within the Moonbase is a bit clunky, but the scenes on the Moon’s surface are quite stylish.

All up it’s a pretty good outing for the Cybermen.

This is a single disc release with an excellent making-of doco and an interesting commentary. The animated eps have Toby Hadoke presenting interviews with Cybermen actors, producer Innes Lloyd and the daughters of writer Kit Pedler. The live-action eps feature a proper commentary with Frazer Hines, Anneke Wills, sound effect person Brian Hodgson and bit-part Moonbase crewman Edward Phillips. It’s a good commentary, although there is a curious pause during episode two. Hines starts to talk about being a child actor and suddenly it fades out, coming back a few minutes later. One can’t help but wonder if the conversion became ‘inappropriate’ for a PG DVD. 😉

Doctor Who: The Moonbase is released on DVD in Australia by Roadshow Entertainment.