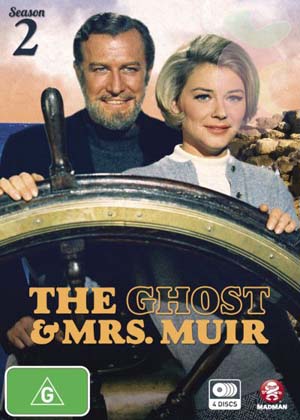 The Ghost & Mrs Muir is a 1960s US sitcom about a widow and her family, who move into a house that is haunted by the ghost of a sea captain. I reviewed Season 1 a couple of months ago (see review) and now it’s time to take a look at the second (and final) season.

The series was actually cancelled by the NBC network after it’s first season, but then picked up for a second by the rival ABC. It ran for a full second season before being cancelled again.

The second season picks up where the first left off. The only changes are a more ghostly font for the ‘Ghost’ in the titles and the fact that Mrs Muir’s daughter Candy now knows about the ghost of Captain Gregg. This season sticks to the same formula of all problems solved by the end of the episode. The only exception being the conclusion, where the last episode’s problem is a direct result of the events of the previous ep.

As with the first season there is some nice continuity and character development — the biggest being the revelation of the ghost to Martha the housekeeper. It’s also good to see the series build on its progressive depiction of women and girls (despite much 60s sexism), particularly Candy who is shown at the leader of her group of school friends, that includes boys. And in one episode, a girl at a birthday party chooses a fire engine as a prize rather than the doll and tea set that are offered to her.

This season sees a few more ‘way-out’ storylines, featuring a bumbling ghost, a medium trying to exorcise the Captain and criminals holding up the family in their own home. There’s even an episode where the residents of the town band together to hold a benefit concert, raising money for an old seamen’s home (although this ep gives Rita Shaw the chance to perform a great musical number as Martha). There is an interesting array of comedian and character actor guest stars, including … Jane Wyatt (Spock’s mum from Star Trek), Avery Schreiber, Eileen Brennan, Ed Begley, Dom DeLuise and Stanley Adams.

Unfortunately the only extra on this disc is a photo gallery. I would have loved some background material on the series. But this one extra is a good one. The photos include some great publicity shots as well as pics from the private collection of Kellie Flanagan (Candy). And if you do want more, you can read an interview with Kellie Flanagan on the Madman website.

The Ghost & Mrs Muir: Season 2 is released on DVD in Australia by Madman.