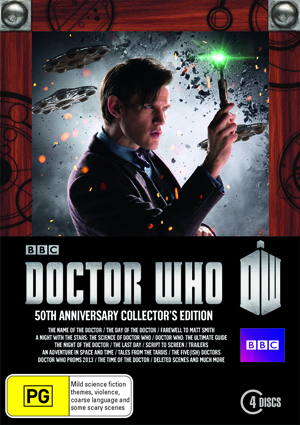 The Doctor Who: 50th Anniversary Collector’s Edition is a set of four DVDs bringing together episodes and specials of significance to the programme’s anniversary, along with a bunch of extras. It’s an odd assortment of previously released material and other stuff that should have had its own release.

It’s the inclusion of extra material such as “The Five(ish) Doctor’s Reboot” and “The Science of Doctor Who” that is the highlight of this release… so it’s those extras that this review will concentrate on. So, let’s take it disc by disc.

Disc 1: “The Name of the Doctor”
Extras:

“The Day of the Doctor” is the anniversary special (see review). Most of the extras have previously been released, with the exception of “Script to Screen – 50th read-through” and the cinema intros. “Script to Screen” is really good — footage of the first read through is interspersed with interviews and clips from the special. The cinema intros are cute.

Disc 3: “The Time of the Doctor”
Extras:

“The Time of the Doctor” is the 2013 Christmas Special (see review). The first two extras on this disc were also previously released. But there are two new ones…

“A Night With the Stars – The Science of Doctor Who with Brian Cox”
This is brilliant. It has nothing to do with the horrible “Science of Doctor Who” doco produced by BBC America (see my review of Doctor Who: The Best of the Doctor 2005-2011, The Documentaries). It is, basically, a televised public lecture by physicist Brian Cox, about the possibility of time travel and alien life. It’s delivered in front of a live audience of celebrities (some of whom are called out of the audience to assist with demonstrations) and is tied in with Doctor Who. It is a brilliant lecture, making complex scientific theories understandable and accessible, and using Doctor Who as an entry point for the public. The linking scenes with Matt Smith are unnecessary, although I can see why they did it — to hook in the younger Doctor Who fans who might not otherwise be interested in a science lecture.

“Farewell to Matt  Smith”
I am not a fan of the docos produced by BBC America. They tend to be repetitive, poorly conceived and full of irrelevant B-grade celebrities. But this one is not bad. The celebrities are at a minimum and the doco does well at summarising the Smith era.

Disc 3: “An adventure in Space and Time”
Extras:

“An adventure in Space and Time” is an excellent doco-drama about the early days of Doctor Who, made to celebrate 50th Anniversary (see review), and most of the extras have been previously released. But there are two significant new additions…

“The Five(ish) Doctors Reboot”
This is the hidden gem of the 50th Anniversary. It’s a short film written and directed by Peter Davison, and originally released online as part of the anniversary celebrations. It tells the story of three actors who had played the part of the Doctor during the classic era — miffed at being left out of the official 50th anniversary production, they attempt to sneak onto the set of “The Day of the Doctor” in order to get on camera. It is hilarious! It is a superbly written film with many in jokes, cameo appearances and obscure references. But it also has a healthy dose of genuine heart. Peter Davison, Colin Baker and Sylvester McCoy are great, and obviously comfortable in taking the mickey out of themselves. And it is a joy to see so many Doctor Who people involved — from Steven Moffat to Paul McGann. Russell T Davies’s bit is pure gold!

It is a real shame that “The Five(ish) Doctors Reboot” has been shoved onto this disc as an extra. It deserves it’s own release, complete with behind the scenes material, interviews and extras. I can only hope that this might yet happen.

“Doctor Who at the Proms 2013”
The Proms has become a popular annual event in the UK, with similar live orchestral presentations of Doctor Who music also being done in Australia under the name of “Doctor Who Symphonic Spectacular”. This is a recording of the 2013 Proms, celebrating the 50th anniversary. Having been to two of the live Australian events, the recording simply doesn’t do it justice. Nothing can quite compare to hearing a live orchestra belt out the music. Having said that, it still makes for good watching… and certainly captures the visual spectacle with all the guest presenters and costumed character appearances.

All up, this is an odd release. Die-hard fans will already have most of the material… making the $79.95 ($84.95 for Blu-ray) at bit steep for those few extras. And if it’s aimed at the casual viewers, who just want the anniversary material, why include such key previously unreleased material? The cynic in me can’t help but think that it’s all just another attempt by the BBC to screw more money out of the fans.

Doctor Who: 50th Anniversary Collection is released in Australian on DVD and Blu-ray by Roadshow Entertainment.