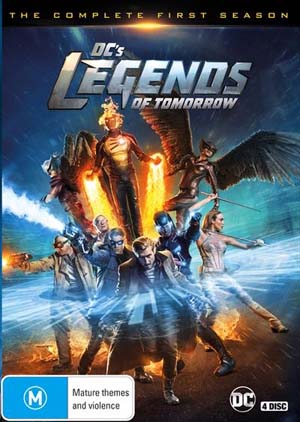 DC’s Legends of Tomorrow is the latest in a series of comic book super hero tv shows based on DC comics. The characters were setup in Arrow and The Flash (to the detriment of season 2 of The Flash – see my review), before being released into the wild with their own series. The result is an action-packed and entertaining foray into OTT super hero silliness. If it’s daft, bonkers fun you’re after… this is it!

Time Master Rip Hunter’s family is murdered by immortal super-villain Vandal Savage during his rise to world domination in 2166. Forbidden to interfere by his fellow Time Masters, Hunter goes rogue, stealing a time ship and gathering together a few redundant super heroes from the past (the Atom, White Canary, Firestorm, Hawkgirl and Hawkman), as well as a couple of redeemable villains (Captain Cold and Heatwave), to help him fight Vandal Savage along the time lines in the hopes of preventing the death of his family.

It’s not as dark as Arrow. It’s not as light as Supergirl. And it doesn’t have the heart that makes The Flash so engaging. It sits somewhere in the middle of these other shows, but still manages to carve out its own niche with a distinct style and flair. It’s slick, fast-paced and stylish, but don’t expect too much depth. Clichés abound… logic does not. But who cares? It is lots of FUN!

Captain Rip Hunter’s smug look to camera at the end of the pilot pretty much sets the tone for this rest of the series. Bonkers OTT entertainment! There are some rather predicable elements to the story arc, but some nice surprises along the way as well, including the appearance of Jonah Hex (comic book Wild West character) in one ep. There is not a huge amount of character development and I really did not find myself caring too deeply for any of them. Having said that, Heatwave probably has the strongest character arc, and Captain Cold is the most engaging of them, probably due to Wentworth Miller’s charismatic performance.

Which brings us to the rest of the cast. Arthur Darvill goes from being a time travelling companion in Doctor Who (Rory) to the swashbuckling time travelling captain Rip Hunter in this series. He is the linchpin and he is rather good. The rest of the hero cast range from adequate to excellent. Danish actor Casper Crump is interesting as Vandal Savage. His performance is often restrained and quite well-pitched… but frankly, there’s only so much you can do with such a clichéd cardboard cut-out villain. [Incidentally, I spent half the eps thinking his name was Randle Savage before someone finally enunciated.]

The DVD release is good, with a range of interesting extras, although the 2015 Comic-Con panel is interesting for all the wrong reasons – a surprisingly flat panel with a distinct lack of chemistry between its participants.

If you’re after some spectacular super-hero fun, without having to think too hard, DC’s Legends of Tomorrow is very entertaining and certainly worth a watch.

DC’s Legends of Tomorrow is released in Australia by Roadshow.