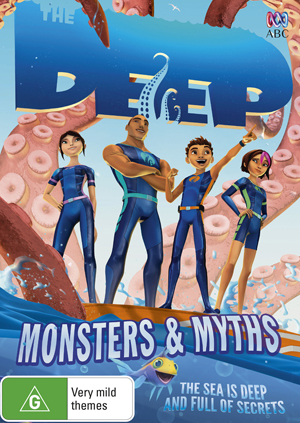 The Deep is an Australian/Canadian co-produced animated series based on the graphic novels by Tom Taylor and James Brouwer (see my review). It’s a thrilling undersea sci-fi adventure in the vein of live action shows such as seaQuest DSV (see my review) and Voyage to the Bottom of the Sea (see my review), but with its own sense of style. Fun, fast and family-friendly, this is a show with cross-generational appeal.

The series follows the adventures of the Nekton family – father Wil, mother Kaiko, and their kids Fontaine and Antaeus (Ant). Aboard their hi-tech sub The Aronnax, they explore the ocean depths, help people in need and search for the lost continent of Lemuria.

This single-disc DVD release collects together the first 9 episodes of the 26-ep first season (yep… it has been renewed for a second season). It’s rather irritating that they haven’t just released the whole season. Hopefully there will be a future release for the entire season with some extras, because there is NOTHING extra on this disc. Normally I don’t bother with this sort of part-season release, but I was kinda desperate to get my hands on this show. Anyway, enough grumbling, let’s get back to what is on here…

Nine excellent episodes. There are no weak links in this batch. Stories range from dealing with sea monsters, pirates and rescues, to arc-driven episodes about the search for Lemuria. Each and every episode has a wonderful sense of adventure, celebrating the joy of exploration and discovery.

The real strength of this series, as with the graphic novels, is the characterisation. The series presents a positive depiction of family relationships and dynamics, with a racially diverse set of characters (something we desperately need more of on our screens). The CG animation works well at translating the style and feel of the original artwork by Brouwer. And the voice cast all do a great job of bringing the characters to life.

If you’re looking for family entertainment that can equally enthral child and adult alike, you really can’t do better than The Deep. Now, can we please get a move on and release the rest of the season?

The Deep: Monsters and Myths is released in Australia on DVD by Roadshow.