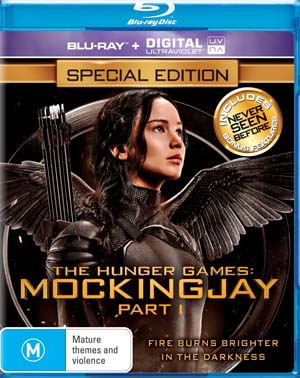 Mockingjay is the finale of the successful Hunger Games trilogy of books, and has been split into two films. Part 1 is now available on Blu-ray and DVD, with Part 2 set for a cinematic release later this year. As half of a third of a story, Mockingjay Part 1 is only one-sixth of a whole… but pretty good for what it is — the set-up for the climax.

Having survived a second round of the Hunger Games, Katniss Everdeen now finds herself cast as the symbol of the revolution — the Mockingjay. It’s a title that doesn’t sit conformably with her, but one she comes to realise she must embrace. As with the previous instalments, the personal story of Katniss and her state of mind is the focal point of the larger canvas, on which is painted the dystopian future society and the growing rebellion. It’s a juxtaposition that continues to work well. And I love the film’s focus on marketing — how even a rebellion needs to sell itself and promote.

The story is exciting, dramatic and thought-provoking, although this film is not as energetic as the previous two, concentrating on the build up of the rebellion. Perhaps it is because it’s actually only half a film. It doesn’t feel complete, as we are given the set-up, without the payoff. So Part Two will probably contain the lion’s share of the energy as it delivers the climax. The splitting of one book into multiple films seems to have become somewhat of a trend, and I’m not sure how I feel about it.

The cast are superb. Jennifer Lawrence, Woody Harrelson, Philip Seymour Hoffman and Donald Sutherland continue to impress in their respective roles. And this time around they’re joined by Julianne Moore, who gives a wonderful performance as the leader of the revolution. But it’s Elizabeth Banks as Effie who really gets to shine, as her character is pushed out of her comfort zone.

The progression of the films in this series has been interesting, with each one feeling less and less YA than the previous. It will be fascinating to see how the last film sits in all of this.

The two-disc Blu-ray release is excellent, with LOADS of extra. Deleted scenes, music videos, behind-the-scenes stuff galore and a commentary that talks a lot about the differences between the book and the film. If only all films came with such good quality extras!

The Hunger Games: Mockingjay Part 1 is released on Blu-ray and DVD in Australia by Roadshow Entertainment.