DVD Review — Doctor Who: The Ambassadors of Death 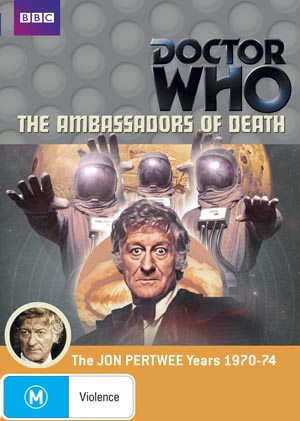 “The Ambassadors of Death” is a long, seven-part story from Pertwee’s first season as the third Doctor — season 7 from 1970. It is an example of Pertwee-era Doctor Who at its best.

Earth loses contact with the crew of its Mars probe. A rescue mission is sent and again, contact is lost. But this time a strange signal is sent to Earth. The Doctor, currently stranded on Earth and acting as U.N.I.T.’s (United Nations Intelligence Taskforce) scientific advisor, takes an interest. We are soon thrown into a high-action, convoluted plot involving alien ambassadors, high-level conspiracies and potential planet-wide destruction. Exciting stuff!

Despite being a long story, at seven episodes, it is surprisingly well paced. The plot has enough twists and turns to sustain it over this length. Granted, I watched it spaced out over a number of days and I suspect the pacing would not seem as good were you to watch is all in one sitting… but do remember, it was made to be watched one episode a week.

The plot is involved and interesting, and topical for its day, with the Apollo 13 problems happening during the transmission of these episodes. It’s all rather well sustained over the course of the seven episodes, with only a few minor hiccups (the Doctor’s disappearing bandaid, for example). I love the way the media is part of the story, with the main villain intending to use it to manipulate public opinion in order to get what he wants. I put the term villain in italics because General Carrington is not your typical villain, as he firmly believes that what he is doing is for the good of humankind. It makes him a really interesting character.

The guest cast are brilliant, with John Abineri putting in a standout performance as the morally misguided General Carrington. I love his chillingly sincere delivery of the line, “It’s my moral duty”, as he prepares to kill the Doctor. And the regulars really shine in this story — Pertwee is at his arrogant, flamboyant best as the Doctor; Caroline John gets lots of action and intelligent dialogue in this story as the Doctor’s assistant, Liz Shaw, and she makes the most of it; and, of course, Nicholas Courtney is as convincing and charismatic as always in the role of Brigadier Lethbridge-Stewart.

The production values are particularly good. There’s lots of good action and stunts, including a big-budget set-piece with a space capsule on a semi-trailer being attacked by a helicopter and bad guys on motorbikes. The effects are quite good, particularly the model work with the Mars probes. The music score by Dudley Simpson is one of his best, with the unusual choice of music for the space scenes being particularly effective.

This is a two-disc release, with the seven eps taking up disc 1, leaving disc 2 looking a little thin on the extras. What’s there is good (particularly the making-of doco), it’s just that I’ve come to expect more from the Doctor Who releases. The commentary is a particularly good one, with cast, crew and stunt people changing from episode to episode. It does, however, also make for somewhat sad listening, given that both Nicholas Courtney and Caroline John have both died since recording it.

This is an excellent story and a great production. Highly recommended!

Doctor Who: The Ambassadors of Death is available on DVD in Australia through Roadshow Entertainment.