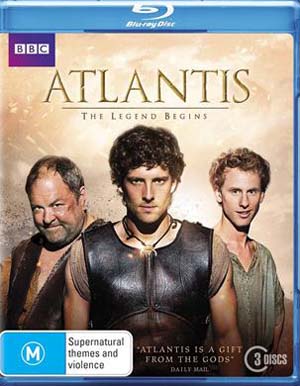 Atlantis is the new series created to fill the gap left by The Adventures of Merlin. And fill the gap is does… by recreating the style, feel, story structure, character types and themes of the earlier series, while changing the setting and shifting around some details. Although lacking the freshness of The Adventures of Merlin, Atlantis still manages to be entertaining. The first season of 13 episodes is collected in this Blu-ray box set.

Kicking off in the present, the series sees a young man named Jason go in search of his missing father. He gets sucked into some sort of underwater time-portal-thingie and finds himself in ancient Atlantis, pre-submergence. There he teams up with nerdy Pythagoras and the gambling/drinking/womanising has-been Hercules to have assorted adventures ranging from the light-hearted to the dramatic. There is also a princess for him to fall for, an evil queen for some plotting and scheming, and a mysterious Oracle who’s not revealing all she knows.

It’s often a bit silly and has poor attention to detail (the same journey in one episode can take anything from a few hours to a couple of days depending on the needs of the story), but it is nevertheless fun.

Atlantis springs from the minds of Johnny Capps and Julian Murphy, two of the people behind The Adventures of Merlin (see my review), and Howard Overman, the creative force behind Misfits (see my review). They seem to have used The Adventures of Merlin as a template for creating this series. Both shows have an overarching theme of destiny within the quasi-historical setting of a well-known mythological framework. Both mix humour, action and drama in the same way. The visual style and feel of both is pretty much identical. And many of the characters and their arcs are similar. A few examples…

All these similarities result in a slightly stale, been-there-done-that feeling. None of which matters if you’ve never seen the Merlin series. I think I would have enjoyed Atlantis more had I not seen the other series. Having said all that, the main characters (who are all well cast) are likable, and they drew me in, so that by the end of this season I was thoroughly enjoying myself — even looking forward to the next season.

Atlantis ain’t gonna win any awards for originality, but if you’re after some diversionary fun, where you don’t have to think too much, you could do a lot worse.

It’s good to see Atlantis get a Blu-ray release as it’s a very pretty show. But there’s not much in this set other than the episodes themselves — just a half-hour making-of doco. Would have liked a little more.

Atlantis is released in Australia on DVD and Blu-ray by Roadshow Entertainment.