Stories from WA, Part 1: Dean and the Zombies

Yesterday I posted about the speaking tour of schools in rural Western Australia that I did last month (see Touring WA). During that tour, I conducted story structure workshops with a couple of the classes at Mt Margaret Primary School. The resulting stories, I felt, deserved to the shared with a wider audience.

I started off these workshops by outlining the most basic of story structures — that a character goes from point A to point B. In order to make the story interesting, the character needs to have obstacles to overcome. This creates drama and conflict. 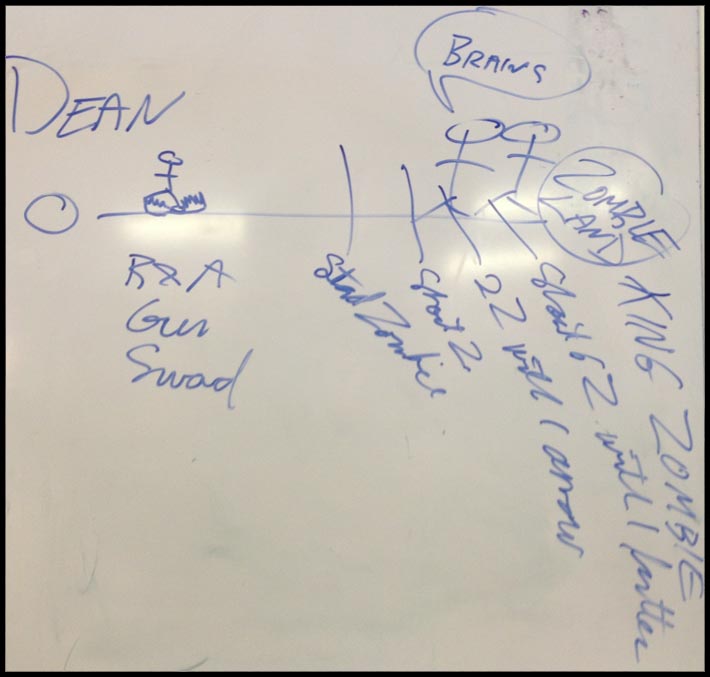 And here’s the final story…

Dean and the Zombies

Dean was a guy who loved killing zombies. Luckily for him there was a nearby zombie reservation called Zombie Land, where hunters could go to pick off zombies to their hearts’ content. So Dean packed his sword, his bow and arrows, and his gun, and set off for Zombie Land.

Dean was busy dreaming about all the zombies he was going to hunt, when he accidentally stepped on a bear trap. The metal jaws clamped tightly on his leg, the jagged edges ripping through his jeans and biting into his flesh.

But Dean was no wimp — he grabbed hold of the trap and forced the metal jaws apart, freeing his leg.

As Dean continued on his way, albeit with a limp, the smell of his blood wafted through the air. The zombies in Zombie Land sniffed and breathed in the aroma of Dean’s escaping life fluids. Overcome by a tremendous bloodlust, they charged the gates of Zombie Land en masse, breaking through the barriers and lumbering towards our hero, Dean.

As the first zombie shuffled towards him, Dean drew his sword, stabbed at the creature and decapitated it with one swift stroke.

Another undead monstrosity quickly lumbered forward to take the place of its fallen comrade. Dean did not hesitate. Within seconds, his gun was in his hand and a bullet had splattered that zombie’s brains all over the pavement.

As Dean continued towards Zombie Land, two more creatures crossed his path. It was time to give his bow and arrow a workout, decided Dean. The arrow streaked through the air, hit the first zombie in the forehead, ripped apart its brain, exited through the back of its skull and embedded itself between the eyes of the second zombie.

Dean was feeling pretty sure of himself now, as Zombie Land finally came into view. But standing before him, six zombies blocked the gates. As luck would have it, they were in single file, one neatly positioned after the other. Dean knew exactly what to do. He loaded his special flaming bullet in the barrel of his gun, took aim and fired.

The fire and metal of the bullet mixed with the blood and grey matter of the creatures, as the six undead denizens dropped to the ground in quick succession. One bullet. Six dead zombies. Awesome!

But as Dean approached the gates, a horrific sight met his eyes. The enormous bulk of the King Zombie thundered towards him. Would his bravery and weaponry be enough?

Dean took a deep breath, held his sword in one hand and his gun in the other, and charged.

So? What do you think? Pretty cool, huh?