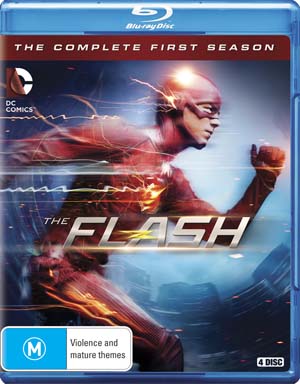 The Flash is one of the many recent super hero comic book adaptations. The question is… do we really need yet another super hero tv show? The answer is YES — YES we do. ‘Cause this one is pretty awesome!

SPOILER WARNING! Yep, lots of spoilers in this review, so if that bothers you… you better move along.

This is a great series! It is fun, generally well-written and thoroughly engaging. So, even though I’m going to criticise certain aspects of it, that doesn’t change the fact that it’s great television.

I loved the 90s television adaptation of The Flash. So I was very much looking forward to seeing how the new series compared. It’s better! I love it! And I love the fact that this new series pays tribute to the original. The casting of 90s Flash, John Wesley Shipp, as Barry’s dad is inspired. And Amanda Pays, Tina McGee in the 90s, shows up as scientist… Dr Tina McGee. Nice! But perhaps the best bit of retro casting is Mark Hamill as the Trickster — the same role he played in the original series.

Interestingly, this series has been made as a spinoff of Arrow, another superhero series, which introduces a pre-Flash Barry Allen in a two-part story. And there are a few cross-overs during the course of this first season of The Flash. Don’t let this put you off. I’ve never seen Arrow, but I had no problem following the events of the cross-overs.

In this version of The Flash, police forensics officer Barry Allen is struck by lightening created through a particle accelerator explosion. The special lightening gives him super speed, and the Flash is born. But the particle accelerator accident also affects a whole bunch of other people living in Central City, turning them into meta-humans — each with their own special abilities. Unfortunately for Barry, most of these meta-humans choose to use their powers on the wrong side of the law. Teaming up with some scientists from the particle accelerator project, Barry sets out to stop and/or help these other meta-humans. We also have a season story arc revolving around the murder of Barry’s mother. She was killed when Barry was ten, in unexplained circumstances, and Barry’s father was wrongly convicted of her murder. So Barry is driven by the need to solve the murder, find the killer and get his dad released from prison.

All this is set up in the pilot episode. Despite being a little clichéd in parts, it is engaging and good-humoured, with a nice dose of heart. The effects are great and the more subdued, urban design of the costume is excellent.

This may be a superhero show, with lots of special effects and spectacle, but it is the characters and their relationships that really make this series. Barry’s unrequited love with reporter Iris West; the replacement father scenario he has with Detective Joe West (Iris’s father); Barry’s friendship with scientists Cisco and Caitlin; but most of all, the complex mentor relationship between Barry and Dr Harrison Wells, the scientist who’s particle accelerator exploded.

The Flash contains lots of wonderful geeky pop culture references— from Indiana Jones to The Hitch-hiker’s Guide to the Galaxy; from Star Wars to Battlestar Galactica. The absolute best has to be the moment Mark Hamill, as the Trickster, says “I am your father”. Gold!

Unfortunately the series does have some inconsistencies and logic flaws. Why is it that some super heroes have powers that extend to their clothing? I’m thinking specifically of FIRESTORM, the cloning guy and the dude with the serious gas issues. And there are times when character motivation simply doesn’t make sense. These elements vary from episode to episode. And like any series with this many episodes per seasons (23), you get great eps, not so great ones and the occasional stinker.

There are definitely more good eps than bad in this series. “Tricksters” stands out as one of the best. Clever use of the 90s series, combines with a great story and a sterling performance from Hamill. I love the fact there are two tricksters. Great stuff.

Time travel is a tricky thing to pull off successfully. Inevitably you risk viewers starting to wonder about paradoxes and insane complexities that just don’t fit together. This series relies on time travel for is story arc and for individual episodes. It manages to pull it off quite well most of the time. In fact, it is the two-part time travel story “Out of Time/Rogue Time”, with its changing-the-past theme, that I thought was the series highlight. The dialogue in particular is beautifully written, with the new time-stream echoing the one that has been replaced.

Unfortunately all the time travel dots don’t quite join up by the time you get to the season final. But if you don’t think about it too much, it is still a very emotive and exciting episode… that ends on one hell of a cliffhanger.

The worst episode of the series has to be the anti-climactic, penultimate mess that is “Rogue Air”. It is so full of logic flaws. If they could tranquilise the meta-humans to move them from their cells to the truck, why didn’t they just knock ‘em out for the entire journey? Why did they ask for bad-guy Snart’s help, when they didn’t actually get him to do all that much? And then the whole Reverse Flash battle was a bit of a let down, leading to a nothing end. As a lead in to the final ep, it hampers the effectiveness of the season as a whole.

The first season of The Flash is a rather brilliant 4-disc release. Lots of great additional material. “The Fastest Man Alive”, a character background doco, is informative and interesting. The doco on the Trickster’s return is great. And there’s lots more, with effects stuff, screen tests, deleted scenes, bloopers and commentaries. I wish every series got such good treatment.

The packaging is a standard Blu-ray case. The episode titles and description are all included on the sleeve, making it easy to find the episode you want on the correct disc. The menu isn’t great. The selection highlight is in red, as is the background — not a well thought out combo. On the plus side, there are no long intros to get to the actual menu — always a good thing.

The Flash: The Complete First Season is released on Blu-ray and DVD in Australia by Roadshow Entertainment.