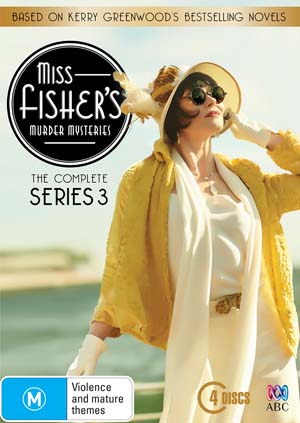 After a delay of a year, the ABC finally renewed this wonderfully entertaining murder/mystery series for a third season. Based on the books by Melbourne author Kerry Greenwood, Miss Fisher’s Murder Mysteries follows the adventures of Lady Detective Phryne Fisher in 1920s Melbourne.

Despite the popularity of the first two seasons (read my reviews here and here), there was a delay in renewing the series for its third season. Thankfully the ABC came to its senses and gave it the go-ahead. And what a wonderful production it is. Building on the relationships established in the first two seasons, things move forward with character development, family and nuptials.

Unfortunately, it all gets off to a shaky start with “Death Defying Feats”, an episode that simply tries too hard and doesn’t quite pull it off. It’s still entertaining, but doesn’t really gel. Not the best way to begin a season. Thankfully, things kick into gear with episode two, “Murder and the Maiden”, and stay steady to the final ep, “Death Do Us Part”.

This season’s mystery arc is provided by Phryne’s father. A bit of an unreliable rogue, he is being pursued by mysterious events from his past. Then there are the character arcs. Dot and Hughe finally head towards tying the knot. And the will-they-won’t-they relationship between Phryne and Inspector Jack Robinson heats up just a little, giving the audience enough to maintain anticipation. Nathan Page really is outstanding as Robinson. It’s also great to see Miriam Margolyes back as Aunt Prudence, this time in a somewhat more vulnerable state.

Essie Davis is, as always, the life and soul of this series. I’ve read a few of the books and enjoyed them, and even though I found Phryne Fisher interesting, I never loved her as a character. Davis’s portrayal, however, makes Phryne shine.

The production is stunning — great costumes; excellent use of locations; and all beautifully shot. If there is an area where budget shows, it’s with some of the CGI historical-ising of scenes.

The final episode has Phryne heading off to England, thus setting things up for the proposed feature film, which is apparently to be shot in the UK. While I’m happy for a film to be made, I’m hoping this doesn’t put an end to the series.

This is an excellent 4-disc DVD release, with a nice selection of behind the scene extras, covering costuming, hair/makeup, music, production design and more. My only complaint is that they are a little too short. The discs are presented in a standard plastic case, which is then enclosed in a nice cardboard slipcase.

Miss Fisher’s Murder Mysteries: The Complete Series 3 is released on DVD in Australia by Roadshow Entertainment.