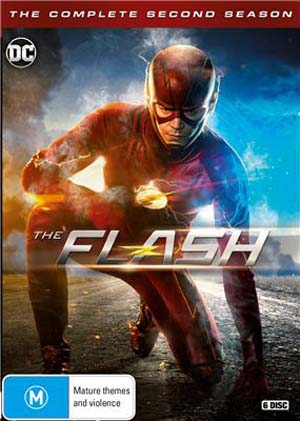 After one season back in the 1990s, comic book super hero, the Flash, returned to television in a new series in late 2014. This first season (see review) was pretty damn good and showed great promise for the future. Sadly, season two doesn’t quite live up to that promise. It’s by no means bad, but it just doesn’t have the spark and the right mix that made season one so wonderful.

So, with the Reverse Flash defeated at the end of last season, our heros were left with the problem of wormholes opening up to other realities. And this season’s story arc comes right through one of those wormholes. From an alternative Earth another Flash (Jay Garrick’s old style Flash from the comics) pays our heroes a visit… but so does a new Dr Harrison Wells and a villainous speedster called Zoom. So our Flash and his team need to deal with this new threat, whilst also battling their own world’s crazed meta-humans.

Barry’s dad (played by 90s TV Flash John Wesley Shipp) gets an interesting story arc. And there are some hints that Wally West may yet end up becoming Kid Flash à la the comics.

There are two main problems with this season.

Firstly it spends way too much time on stories that are not its own. There are cross-over stories with the Arrow series, that actually require you to watch the other show. First season had cross-overs, but you didn’t really have to watch Arrow if you didn’t want to. But this time we get half a story on The Flash with the other half on Arrow. And then there is the set-up of characters for the first season of the new series, Legends of Tomorrow. With all this faffing about on other stories, the season loses momentum with its own story.

The second major problem is the season story arc. The Zoom storyline simply does not have the impact of season one’s Reverse Flash arc. And it all kinda falls apart at the end anyway, leaving the season feeling unfulfilled.

But it’s not all doom and gloom. The series remains, for the most part, engaging and good-humoured. The cast is fab, the characters interact well and develop, and the effects are excellent.

There is a great set-up right at the end for season three, leaving things open for a potential storyline straight out of the comic books. I have high hopes for season three. And the announcement of an all-singing, all-dancing musical cross-over episode with Supergirl has me intrigued.

This 6-disc set is an excellent release. It comes in standard packaging (with ep titles and synopses), but is chock-full of extras. Great extras. Seriously wonderful stuff. So much behind-the-scenes and making-of material. BIG thumbs up for that!

The Flash: The Complete Second Season is released on Blu-ray and DVD in Australia by Roadshow Entertainment.